Two weeks ago, Justice Anthony Kennedy represented what many of the left have called the evolving national opinion on gay “rights” when he wrote the majority opinion striking down the federal Defense of Marriage Act. 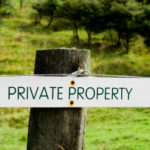 While the DOMA decision, the Proposition 8 case and the Shelby County voting rights case have dominated the headlines, the U.S. Supreme Court also quietly (at least by media hits) issued another ruling showing that perhaps the Court is evolving in another area – property rights.

In 2005, the Court ruled in Kelo v. City of New London that private property could be taken in favor of economic development as a “public use” under the takings clause of the Fifth Amendment.  The decision garnered immediate backlash and caused many to consider the ramifications of government control over private property (outside of their own property taxes) for the first time.  Since that time, there is evidence that in takings, and other property rights cases, the Court is showing greater respect for private property rights. While property rights advocates have found reason for optimism in recent years, federal, state and local governments have not abandoned their extortion schemes.

Perhaps history books will one day show Kelo as the high-water mark for government extortion of private property.

Just last year, in Sackett v. Environmental Protection Agency, the Supreme Court unanimously rebuked the EPA for abusing its authority in seeking to fine an Idaho couple $75,000 per day for an alleged Clean Water Act violation without a judicial hearing on the merits.

Then last December, the Court ruled that when the government floods property – even if only temporarily – that constitutes a taking of property that must be compensated.  Again, the Court unanimously ruled against the federal government and the Obama Administration in favor of the property owner.

And, now, the Court has issued perhaps its most stinging rebuke of governmental extortion of private property in Koontz v. St. Johns River Water Management District.

The case began nearly 20 years ago when Coy Koontz, Sr. hoped to fill and develop a small portion of his 14.9-acre Florida property.  He applied for the proper permits and – since some of the area contained wetlands – he offered to put about 75 percent of the property up for a conservation easement, a considerable concession.  Yet this was not enough for zealous Floridian authorities.  They countered that Koontz could only develop less than an acre (about five percent) of his land if he gave the state the remaining 95 percent.  Alternatively, he could pay hefty sums to improve some state-owned land several miles from his plot.

Koontz sued, arguing that the state’s two options (forfeit nearly all his land or improve distant property) amounted to a taking without just compensation.  While he won at the trail and appellate levels, the Florida Supreme Court held that the state’s demand for money was not an impermissible taking.

On June 25, Justice Samuel Alito, writing for the majority of the Court, corrected this 19-year injustice and ruled that the Koontz family was indeed the victim of an unconstitutional taking.

Koontz applied for the permit in 1994.  Justice was finally delivered two weeks ago.  Unfortunately, he was not around to see it.  He passed away waiting for the wheels of justice to turn.  That’s tragic and shameful.  (His son, Coy Koontz, Jr., carried on the lawsuit.)

Justice Alito correctly ruled that the Court’s prior precedent concerning land use permit approval was applicable in Koontz, even though the state denied the permit.

The Court previously ruled in Nollan v. California Coastal Commission and Dolan v. City of Tigard that the government could not condition approval of a land permit on the owner relinquishing his property unless there was a “nexus” and a “rough proportionality” between the government’s demand and the effects of the proposed land use.  In the Koontz case, state authorities argued that since they did not actually issue the permits as the governments had in Nollan and Dolan those cases were not controlling.

Explaining how Koontz’s argument lost at the Florida Supreme Court, Randal O’Toole of the Cato Institute, noted that:

The Florida Supreme Court rejected Koontz’s argument, saying that there was a big difference between his situation and the Nollan/Dolan cases.  In the latter cases, the permits were granted conditional upon the property owners giving up land.  In Koontz’s case, the permit was denied unless he gave up land or money.

Justice Alito refused to abide that governmental two-step, writing that:

The fulcrum this case turns on is the direct link between the government’s demand and a specific parcel of real property.  Because of that direct link, this case implicates the central concern of Nollan and Dolan: the risk that the government may use its substantial power and discretion in land-use permitting to pursue governmental ends that lack an essential nexus and rough proportionality to the effects of the proposed new use of the specific property at issue, thereby diminishing without justification the value of the property.

It is in this way that Alito correctly applied the Court’s precedent to conclude that:

In a New York Times opinion piece titled “A Legal Blow to Sustainable Development,” the author whines, “the revolutionary and destructive step taken by the court in Koontz is to cast the burden on the government to justify the mandates according to the heightened Nollan-Dolan standard…  Moreover, this heightened standard will result in a huge number of costly legal challenges to local regulations.”

The correct response to that bit of hand-wringing is, “good.”  The government should have to justify its extortionate demands – especially when they condition a land permit on improvement to land that isn’t even connected with the specific property seeking to be developed.  With its regular writers presumably preoccupied with more high-profile cases, the Times farmed this article out to Vermont Law School professor John D. Echeverria – whose primary expertise is listed on the law school’s website as “climate change.”

I must have missed that class when I was in law school.

The Pacific Legal Foundation argued the Koontz case before the U.S. Supreme Court and deserves kudos for a job well done.  After the oral arguments this past January, the National Center hosted a luncheon for Jim Burling, a member of PLF’s winning legal team, where he spoke to Capitol Hill leaders about the importance of preserving private property rights in the face of hostile local, state and federal bodies who seek to limit progress and restrict the American people.

The New York Times is upset, the Koontz family is vindicated and the Supreme Court is evolving on private property rights.  That’s a Court decision worthy of our attention.