An editorial in the January 15 Detroit News by our own Jeff Stier asks the question: Will Michigan Governor Snyder “drop the ball” on e-cigarettes?

The Michigan legislature passed a bill to ban the sale of e-cigarettes (tobacco-free nicotine-delivery devices that emit water vapor, not smoke, and which many smokers have been using to quit carcinogenic tobacco cigarettes) to minors, but certain so-called public health groups have been urging the governor to veto it.

The reason: the legislation does not go a step further and treat e-cigarettes just like tobacco cigarettes in other ways — ways intended to deter their use.

The problem with this advice — even though it comes from “public health” groups — is that it almost certainly is lethal.

People shouldn’t smoke. They should not start, and if they do start, they should quit. But some people — many people — have trouble quitting, so they keep inhaling tobacco smoke and tar and nasty dirty ingredients that increase their chance of getting lung and other cancers and other really horrible diseases, too, such as emphysema and heart disease. 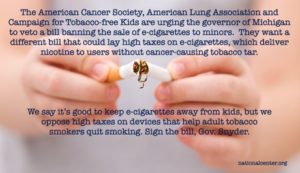 Some of those folks in recent years have been able to quit with the help of nicotine patches or gum, and still others with the help of drugs such as Bupropion (brand names: Zyban, Wellbutrin and Aplenzin), a prescription anti-depressant that helps with nicotine withdrawal symptoms, or Varenicline (brand name: Chantix), which blocks some nicotine receptors in the brain, making smoking less pleasurable and reducing nicotine withdrawal symptoms.

But not everyone who tries to quit with these devices or drugs, or by willpower alone, has found success.

For them, e-cigarettes can be lifesaving.

A British study released in 2014 found that, according to WebMD, “people who wanted to quit smoking were about 60 percent more likely to succeed if they used e-cigarettes compared to would-be quitters who tried an anti-smoking nicotine patch or gum.”

“The same 60 percent statistic held,” WebMD reports, “when the study authors compared the use of e-cigarettes as a quit-smoking aid to people who tried to quit using willpower alone.”

The Guardian has more here.

We hope Governor Snyder, and policymakers in other states, will agree with our Jeff Stier that keeping e-cigarettes out of the hands of minors but available to people trying to quit smoking is THE BEST policy to save lives.

As Jeff noted in the Detroit News, the FDA’s chief tobacco regulator, Mitch Zeller, has said:

Right now the overwhelming majority of people seeking nicotine are getting it from the deadliest and most toxic delivery system, and that’s the conventional cigarette. But if there is a continuum of risk and there are less harmful ways to get nicotine, and FDA is in the business of regulating virtually all of those products, then I think there’s an extraordinary public health opportunity for the agency to embrace some of these principles and to figure out how to incorporate it into regulatory policies.

In other words, let’s develop smart regulations that give options to people who are trying to quit smoking.