07 Oct 2016 Should Abortions Be Federally Funded?

Should taxpayer dollars be used for abortions? On the 9/30/16 episode of RT Network’s “The Big Picture,” one panelist suggested that abortion should be covered by the government through a single-payer system.

Horace Cooper, legal analyst at the National Center for Public Policy Research and the co-chair of Project 21, responded: “This is a lesson… of socializing any area or any industry in the government… It is far better, if people are really concerned about what dictates government makes, to privatize areas… so people are free to make their own choices.” 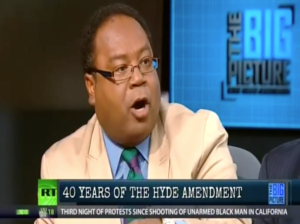 Responding to host Thom Hartmann’s snarky comeback, Horace said, “I haven’t been reading stories about people in the military who are ‘dying like dogs in the dirt’ because they’re not able to have access to a federally-funded abortion. This is mythology on your part…. I think we should do to the abortion industry generally what you guys want to do to Wal-Mart. We should marginalize them, we should push them to the edge of the community, and we should find every regulation that we can to put them out of business.”

Other topics covered in this clip include teen pregnancy rates and raising the minimum wage. Watch below.