ConservativeBlog.org
Posted at 05:50h in Blog by Amy Ridenour

The National Center is a recognized U.N. NGO (non-governmental organization) — I expect, probably one of the few NGOs that wants its home country to withdraw from the United Nations.

This week, we have three representatives at the 11th Session of the United Nations Framework Convention on Climate Change (COP-11) meeting currently ongoing in Montreal. (If you have no idea of what a COP meeting is, think Kyoto Global Warming Treaty.)

Anyway, continuing that grand American tradition of giving away free stuff pretty much everywhere we go on the globe, our National Center representatives are giving away free toilet paper at COP-11.

No, Canada is not having a toilet paper shortage (that we know of; I haven’t checked to see if they have price controls on the stuff). We’re just politely emphasizing the failure of the Kyoto Treaty to the group that gave birth to it.

Under the European Union’s “CO2 Emissions Trading Scheme,” companies are allotted credits that allow them to emit a fixed amount of carbon dioxide. Companies that reduce their carbon dioxide output, and thus don’t use all of their credits, can sell them to companies who are exceeding their C02 allotments.

As the flawed Kyoto treaty is all but dead, emissions credits aren’t likely to be of any value in the future.

“Emissions credits aren’t worth the paper they’re printed on,” said David Ridenour, Vice President of The National Center, “Unless, of course, that paper happens to be toilet paper.”

In 2012, the first phase of the Kyoto Protocol will expire. Major nations, including the United States, Australia, China and India already have indicated they do not support developing a new Kyoto-style treaty to take effect when the first one expires.

Even British Prime Minister Tony Blair, formerly a staunch Kyoto cheerleader, has recently switched gears, saying he expects Kyoto-style mandatory arrangements to be supplanted by voluntary incentives, as “no country is going to cut its growth or consumption substantially in the light of a long-term environmental problem.” He adds: “To be honest, I don’t think people are going, at least in the short term, to start negotiating another major treaty like Kyoto.”

The credits that The National Center is handing out this week are printed on rolls of toilet paper with the phrase “emissions credit” appearing throughout the entire roll in five of the six official U.N. languages. The Chinese translation is absent.

“It was difficult to obtain a good Chinese translation for the term ’emissions credit,'” explained Peyton Knight, Director of Environmental and Regulatory Affairs for The National Center. “This may be due to the fact that China, despite being the second largest emitter of so-called greenhouse gases in the world, is exempt from Kyoto’s emissions targets. There must not be much demand for the term, ’emissions credit.'”

Even under the current agreement, the European Union is on a sure track to miss its Kyoto emissions reduction target of eight percent below 1990 levels. The 15 original member nations of the EU, which have all ratified the Treaty, reduced greenhouse gas emissions by a paltry 1.4 percent between 1990 and 2003. According to the U.N., this tiny reduction is due in large part to the fall of the iron curtain and the subsequent dismantling of communist-era factories.

Eleven of the 15 original EU nations have reported increased emissions since 1990.

“It’s easy for politicians to make speeches about the need to reduce greenhouse gas emissions, but few will do what it takes to meet the Kyoto Protocol’s targets because they know it is the surest path to economic ruin,” said David Ridenour. “No one wants to pay these costs to comply with a treaty that would have little or no impact on the climate. The Kyoto Protocol is dead. It’s time to give it a decent burial.”

A recent analysis commissioned by the International Council for Capital Formation (ICCF), a European think-tank based in Brussels, found that meeting Kyoto’s emissions targets would result in significant economic losses for Europe. The study looked at four European states and concluded that by 2010 their economic growth would be greatly reduced from what it would have been without meeting the Protocol’s targets. Spain would see a 3.1 percent reduction in economic growth, Italy 2.1 percent, Britain 1.1 percent and Germany 0.8 percent.

The ICCF study also found that purchasing international emissions credits would damage Europe’s economy and lead to higher energy prices. Electricity prices would rise by an average of 26 percent, natural gas prices by 41 percent and unemployment would increase by several hundred thousand in each of the four countries. The study notes that companies would “pass the cost of the international [emissions] credit onto final consumers of energy via higher prices.” Italy alone could transfer four billion euros to developing nations by 2010 if it purchases such credits.

Although it is on pace to fall short of its current Kyoto obligations, the EU is already looking ahead to when the Kyoto Protocol expires. At this week’s Climate Change Conference, the EU is urging other nations to join its CO2 Emissions Trading Scheme and help to build a “global carbon market” for the trading and selling of emissions credits.

“Despite having already bitten off more than it is willing to chew, the European Union is back at the global warming table for a second helping,” said Knight. “It’s time for the EU go on a diet free of global warming hysteria.”

In the meantime, Ridenour is urging participants in Montreal this week to stock up on The National Center’s emissions credits.

“Unlike the EU’s emissions credits, ours are free and actually serve a purpose,” he said. 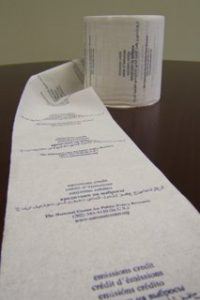