ConservativeBlog.org
Posted at 09:26h in Blog by Amy Ridenour

Something doesn’t quite seem right with this glowing interview the Washington Post conducted with environmental activist Dr. Lara Hansen of the World Wildlife Fund.

Dr. Hansen is quoted saying, “When I was 5 or 6, my father read me an article in Science magazine about ozone depletion, which is what causes increased ultraviolet radiation…”

Here’s a link to Science. Look at it and tell me a 5-or 6-year-old could understand it.

But maybe Dr. Hansen is a genius. After all, in 2004, she told the U.S. Senate in testimony that the average global temperature had increased by 0.6 degrees C over the last 100 years, caused specifically by “carbon dioxide and other greenhouse gases, generated by the anthropogenic burning of fossil fuels.”

Most scientists, even those in Al Gore’s camp, would say modern science doesn’t fully understand all the causes of warming since the Little Ice Age ended a century and a half ago (or temperature fluctuations before then, for that matter). Yet Dr. Hansen apparently knows more than most scientists, as she seems to know nature is not playing any role.

What’s more, she believes the matter is so settled, newspapers shouldn’t even tell readers alternative theories:

Washington Post: Why is climate change such a contentious issue among scientists?Dr. Hansen: Climate change isn’t a contentious issue among scientists. The belief that it is is actually generated by the belief that in order to create balanced news coverage of climate change, you need to present both sides of the story. That’s just not appropriate. It is like doing a story on geography and having to include an opinion about how the Earth was quite possibly flat.

If the science of global warming is settled, Dr. Hansen, does the World Wildlife Fund support zeroing-out federal appropriations for further climate change research? Might as well. We Know Everything Important Already.

The Post, for its part, was unfazed about the notion that newspapers shouldn’t cover “both sides” of the climate change debate. (Wait — didn’t Dr. Hansen just say “climate change isn’t a contentious issue among scientists”? So what’s the other side of the “both sides” she doesn’t want covered?) The Post responded with this softball: “Why has the public been so slow to understand climate change?”

Perhaps the Post agrees with the cover-one-side-of-the-science, as the Post adorns the interview of Dr. Hansen with this box: 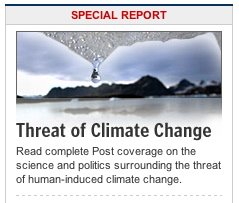 Note the Post’s ad says “the threat of human-induced climate change.” Not possible threat, not alleged threat, just “the threat.”

And, of course, it is a threat uniformly, not in any way a benefit.

And “human-induced,” naturally. (Well, maybe not “naturally.” Nothing is more un-P.C. than using the word “nature” in the same sentence as “climate change.” Extreme environmentalists worship the awesome power of nature, except when doing so interferes with the propagation of their ideology.)

If it turns out that nature is the primary cause of climate change (which is what I believe) will the Post still call climate change a “threat”? Or will we all be urged to embrace it enthusiastically, sea levels be damned?