ConservativeBlog.org
Posted at 01:59h in Blog by Amy Ridenour

In honor of the Oxford American Dictionary’s Word of the Year, I introduce to you the latest in tools for a carbon neutral lifestyle: the Kyoto Survival Kit. 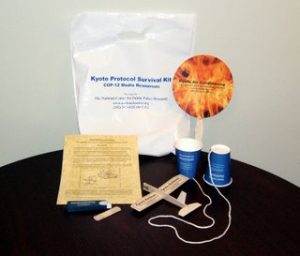 As an accredited United Nations NGO (yep, really), The National Center is distributing these items (go here to see a close-up of each item) at the Twelfth Conference of the Parties to the United Nations Framework Convention on Climate Change currently taking place in Nairobi, Kenya.

Our intention in distributing these items is to remind the delegates that many things we in the first world take for granted — such as the ability to fly to international conferences and make phone calls home while there — require the use of energy.

The kits contain several examples of technologies that, while impractical, would be considered “Kyoto-friendly” because they produce minimal greenhouse gas emissions. The kit items include:

Despite ratifying the Kyoto Protocol, the European Union is on track to miss its Kyoto emissions reduction target of eight percent below 1990 levels by 2012. According to the U.S. Energy Information Administration (EIA), the CO2 emissions for the 15 original member nations of the EU increased an average of nine percent between 2000 and 2004. By comparison, the United States, which has not ratified the Kyoto Protocol, saw its CO2 emissions increase only 1.7 percent during the same time period.Even if the EU and industrialized nations of the world met their Kyoto targets, the treaty would have little impact on reducing worldwide CO2 emissions because it exempts developing nations from making emissions cuts. This includes India and China, nations that increased their CO2 emissions 11.2 percent and 55 percent, respectively, between 2000 and 2004. According to the EIA, CO2 emissions from developing Asian countries will surpass those from North America by about 21 percent by 2010.

Thus, developing nations would have to eventually bear the burden of Kyoto-style controls if a worldwide reduction in emissions is to be achieved. Such controls would be economically devastating, and could prevent impoverished nations from achieving the necessary progress they need to sustain themselves and the lives of their citizens.

This is underscored by a recent report authored by British economist Sir Nicholas Stern: “In future…international carbon finance flows will be required to support cost-effective emissions reductions…[and] will require a major increase in the level of ambition of tradition schemes such as the EU [Emissions Trading Scheme]…These flows will be crucial in accelerating private investment and national government action in developing countries.”

“The Kyoto protocol is a shell game that the developing world is bound to lose,” said David Ridenour, vice president of the National Center. “Carbon dioxide emissions are necessary for industrial, medical and technological advancement. The EU knows this, which is why it is failing to meet its targets. Once developing nations are brought into the Kyoto compact, the EU will continue to use its wealth to purchase more and more emissions credits. This will allow Europeans to continue to live the lifestyles to which they are accustomed while condemning the developing world to a future of hardship and poverty.”

For example, only about five percent of Malawi has electricity. Other nations like Kenya, Mozambique and Namibia are also struggling to provide adequate electricity to their civilian populations. In total, only some ten percent of sub-Saharan Africa has electricity, which is why it is imperative these nations forge ahead with increased electricity production by any means possible, including the use of fossil fuels, and why the Kyoto Protocol is not in their long-term economic interests.

“People in Africa and developing nations deserve the opportunity to create better, healthier lives for themselves and future generations,” said CFACT advisor Pastor Abdul Sesay, a native of Sierra Leone. “Sadly, it seems Kyoto Protocol supporters are willing to support a treaty which would deny them a basic necessity like affordable electricity. How many more must go hungry and die before Western leaders understand that this is not a political game?”

The National Center for Public Policy Research is a non-partisan, non-profit educational foundation based in Washington, DC and founded in 1982. Media may obtain a free Kyoto Protocol Survival Kit on a first-come, first-served basis by contacting The National Center at (202) 543-4110. A photo of the Kyoto Protocol Survival Kits can be viewed at www.nationalcenter.org/KyotoSurvivalKit.html.

CFACT is a non-profit public interest organization, also based in Washington, D.C., that promotes market-based and technological solutions to issues relating to environment and development (www.cfact.org).