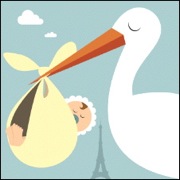 Then he took luxury private jets rather than flying on more energy-efficient commercial flights to promote his film “An Inconvenient Truth.”

Now, he’s urging people to keep it zipped when has no history of such self-restraint himself.

“You have to have ubiquitous availability of fertility management so women can choose how many children to have… you have to lift child survival rates so the parents feel comfortable having small families,” said Gore.

According to the World Bank, the current world fertility rate is 2.5 births per woman. That’s nearly 40% below the fertility rate of the now broken Gore household.

But don’t blame Al Gore. “Fertility management” can’t have been very widely available, nor child survival rates very high, in the rough neighborhood in which he grew up… the luxury Fairfax Hotel in Washington, D.C.’s Embassy Row section.