ConservativeBlog.org
Posted at 05:19h in Blog, Health by Amy Ridenour 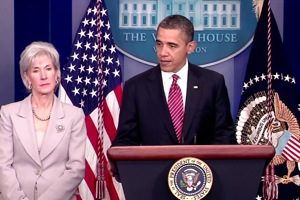 As part of its campaign to promote its HHS birth control/early abortifacient mandate, the Obama Administration has repeatedly claimed that 99 percent of all women have used birth control at some point in their lives.

For instance, on February 10, the President said:

Nearly 99 percent of all women have relied on contraception at some point in their lives –- 99 percent. And yet, more than half of all women between the ages of 18 and 34 have struggled to afford it.

Today, nearly 99 percent of all women have used contraception at some point in their lives, but more than half of all women between the ages of 18-34 struggle to afford it.

Yet the National Health Statistics Report (Number 36, March 3, 2011), released by the same Department (HHS) that is pushing the mandate, says (page 21) that only 86.8 percent of women aged 15-44 have ever had vaginal intercourse.

Vaginal sex participation rates for women do not reach 99 percent until the 40-44 age cohort, at which point, birth control is becoming unnecessary and along with it any utility the HHS mandate could possibly have.

The President also claims “more than half of all women between the ages of 18 and 34 have struggled to afford” birth control. “Struggled” is subjective, but birth control is not expensive. As Andrew McCarthy reports in a February 11 National Review article:

Planned Parenthood reports that birth-control pills run as low as $15 per month — and at the click of a mouse, PP will help you find a health center from which to get a prescription. Like the pill, diaphragms and the “Nuva Ring” start as low as $15 per month, and PP will work to get you set up with Medicaid or other state programs that defray costs — just as it will if you prefer the cervical cap route, which will set you back about $70 (with the spermicide ‘kit’) but, like a diaphragm, lasts about two years. Starting at $400, Implanon, a thin implant inserted in the arm, sounds costly at first blush, but it lasts for three years. Injections of Depo-Provera, the “birth control shot,” go for about 40 smackers, and they last three months.

Condoms cost about a quarter, and aren’t hard to find free.

Nor do women bear all the financial costs for birth control (though you’d be hard-pressed to find evidence that men ever open their wallets in White House and HHS commentary). The Planned Parenthood-associated Guttmacher Institute reports that 16.1 percent of women rely on male condoms and another 9.9 percent the man’s vascectomy as their birth control method. It is probably reasonable to assume that the man is paying at least his share of the cost of condoms and vasectomies and probably more, particularly for the latter. Likewise, most married women have combined finances with their spouses, and birth control costs, like those for dinner, are likely to come out of the family income.

An additional 6.3 percent of women, the Guttmacher Institute reports, rely on no-cost methods (withdrawal and periodic abstinence). We can assume there is no “struggle” to afford methods that rely more on self-discipline than technology.

The main objection to the HHS birth control mandate is that it is unconstitutional. A second one relates to the nature of health insurance: it is designed to cover expensive, unpredictable events, not relatively low, routine expenses. (Otherwise, we’d buy insurance to cover our food bills.) But the fact that there are greater reasons than White House mendaciousness to oppose the birth control/early abortifacient mandate does not excuse the White House’s inaccurate spin.