Press Release
Posted at 16:37h in Articles by The National Center

Washington, D.C. – Freedom Plaza in Washington, D.C., home to an Occupy D.C. encampment since September, on Friday, February 17 will be the scene of a street theatre designed to remind the Obama Administration and both houses of Congress that future generations shouldn’t be required to repay trillions in debts incurred today by their parents and grandparents.

The street theatre event will be held at noon until 12:30 PM on the eastern end of Freedom Plaza (13th Street and Pennsylvania Avenue NW).

“Our national debt is outrageous and out-of-control, and our overblown spending today is still likely to be owed after I’m dead and gone — even if I live a long and healthy life,” said David Almasi, executive director of the National Center for Public Policy Research and director of the National Center’s “Occupy Occupy DC” project. “The real crime is that the future of today’s children will forever be tied to this debt. Won’t anyone think of the children?” 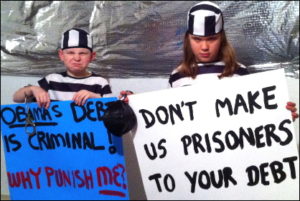 “Why should I pay the debts? Seriously, I’m, like, twelve,” said Kate, who plans to attend the rally.

“I don’t want to spend 15 trillion dollars on what the White House did,” said Chris, 11, who also plans to attend. “I’m not even sure if I’ll ever make that much money.”

The National Center for Public Policy Research obtained a permit to hold daily noontime events at Freedom Plaza between February 12 and March 15.

The National Center for Public Policy Research, founded in 1982, is a non-partisan, free-market, independent conservative think-tank with over 100,000 recent supporters. Contributions to it are tax-deductible and greatly appreciated.