ConservativeBlog.org
Posted at 11:05h in Blog, Health by Jennifer Biddison 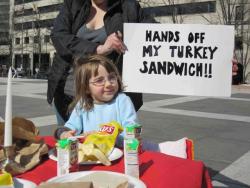 Apparently the only one to blame in Nugget-Gate is a lone preschool teacher.  Ha.

You may remember that two weeks ago we used our Occupy Occupy D.C. permit to host a “Lunch-In,” where we ate turkey sandwiches in solidarity with a North Carolina preschooler who was denied the turkey sandwich her mother packed for her and thus had to eat the school’s chicken nuggets instead, simply because her home-packed meal wasn’t deemed nutritious enough by authorities.

Chicken nuggets instead of a turkey sandwich?  Lunchbox Police?  The outrage over this nutritional craziness went viral and national, and our protest alone received media coverage from the Drudge Report, Weekly Standard, Insta-Pundit, Fox Business Network, and more.

Well there’s nothing that overreaching bureaucrats hate more than public criticism — and boy did they hear a lot of it.  We would hope that the criticism would cause them to thoughtfully reconsider the ways they implement their nutrition curriculum, and change their focus to educating children and parents rather than sending Nutrition Stormtroopers into schools to randomly target home-packed lunches.

But of course that would be expecting too much from government, as we know all too well from experience.  And the poor victim this time is the lowest government employee on the “food chain,” so to speak: the preschool teacher, who has now been suspended indefinitely.

I’m not saying the teacher had no role in Nugget-Gate.  Apparently she was the one who sent the student through the lunchline.  But I have to sympathize with someone who was hired to teach at-risk preschoolers, only to have to deal with Stormtroopers coming to her class looking for lunches to target and destroy. She probably thought her job was on the line if she didn’t enforce regulations, and instead she lost her job for overreacting.

Diet Vader needs to do some soul searching before sending any more Nutrition Stormtroopers into classrooms.  Stop blaming the teachers for something that is obviously much more epidemic than this isolated incident.