ConservativeBlog.org
Posted at 14:55h in Blog, Health by Jeff Stier

Thursday, May 31st is the World Health Organization’s World No Tobacco Day.

The world would be a better place if nobody used tobacco.

Few would disagree that the goal is unrealistic. But what is the harm of aiming for such an idealistic outcome? The danger is actually the loss of millions of lives due to cigarette smoking when less harmful alternatives should be a choice.

Please allow me explain. The problem with the WHO approach is that it fails to take into account the fact tobacco is used in very different ways which come with very different risks – and different opportunities.

Consider the difference between cigarette smoking and the use of smokeless tobacco such as Swedish-style snus.  This consideration is something WHO fails to do, or more likely, it chooses to ignore in calling for a world without tobacco instead of a world without smoking.

Cigarette smoking is terribly harmful. Snus isn’t safe, but it isn’t even in the same league in terms of the dangerous effects. Burning tobacco and inhaling it is the most serious danger of tobacco use. The oral cancer risk of snus is much lower than you’ve been lead to believe. Just look to Sweden’s relatively low rate of oral cancer and you’ll be a “tobacco harm reduction” believer.

While I wouldn’t encourage anyone to start using any tobacco product, even snus, I would be thrilled if smokers switched to the less harmful products. Similarly, although more complex, while I’d like to see the number of new tobacco users decline, I’m very concerned about the choices made by people who do start using tobacco products. I’d like those people’s (poor) choices to be informed by science. That means they would understand that if they decide  to smoke cigarettes, they are making the most dangerous choice, and if they pick a non-combustible product, their choice is far less bad.

Activists can’t seem to accept the fact that many people will continue to using tobacco regardless of the name do-gooders have given to the day.

Public health groups not only fail to help people make these possibly life-saving distinctions, but now they’ve taken up the fight to prevent private industry from making the case, even in a regulated environment.

That is why the theme of the day, fighting “intimidation” from big tobacco, is so unfortunate. And so harmful.

The WHO says the day is about focusing “on the need to expose and counter the tobacco industry’s brazen and increasingly aggressive attempts to undermine global tobacco control efforts.” 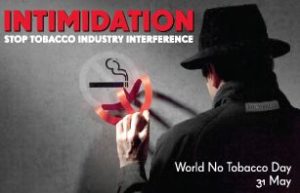 The sad irony is that this is exactly what the WHO is doing. Using slick marketing campaigns and pictures like the one above, WHO leverages its bully-pulpit muscle, together with government regulators, government who fund it, and other NGO’s to silence not only industry, but those of us in the public health community who are realistic enough to advocate for a science-based harm reduction approach.

Instead, NGO’s demonize industry and anyone who sides with them. The government-funded campaigners zealously push their “quit or die” prohibitionist view that calls for censoring any attempt to help smokers and would-be-smokers understand the different risks of tobacco products. And they do so at the peril of cigarette smokers who repeatedly fail to quit smoking using ineffective government-approved nicotine replacement therapy. They also risk the lives of millions of future tobacco users who will make the worst possible choice as a result of these NGO campaigns.

This danger is more than hypothetical. There is an immediate risk that when the European Union issues its new tobacco directive in the coming months, it will attempt to back out of the exemption they gave Sweden from the EU’s overall ban on snus. Yes, cigarettes are available throughout Europe, but don’t even think of using the less harmful alternative unless you are in Sweden, the home of the world’s healthiest tobacco users. But now that could change — for the worse.

In the name of public health, the EU is contemplating banning the use of any flavorings in all tobacco products including snus in Sweden. Snus without flavorings is like Coca-Cola without the syrup. Except it would taste a lot worse. This, according to activists, is the goal.

But Sweden’s tobacco users would be left with no choice but to use the more harmful cigarettes. And to the prohibitionists who believe the other choice – the intended consequence- would be for them to just quit tobacco use completely, look at the rest of Europe. It hasn’t happened.  Simply put, if the EU bans flavorings it is tantamount to a ban on the least harmful tobacco products and will kill tobacco users today and into the future.

The WHO and like-minded groups should instead encourage governments to give tobacco users more science, more information, and yes, less risky choices, even if imperfect, to help them reduce their risk from tobacco. The “no tobacco” idea looks good on paper, but in our imperfect world, it actually does more harm than good.