ConservativeBlog.org
Posted at 18:24h in Articles, Blog by David Almasi 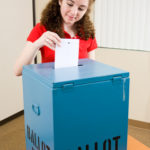 In a recently-published Daily Caller commentary, I point out that the lead plaintiff in the ACLU/NAACP lawsuit against the Commonwealth’s new voter ID law was able to get herself an ID the day after the law was upheld.

I noted that the biggest apparent impediment to her success in this pursuit was not fire hoses, dogs or the KKK, but that the handicapped Viviette Applewhite had to navigate the city’s public transit system.  What she really could have used this whole time was a ride — not a lawsuit.  But something so easy and commonsense doesn’t seem to play into the left’s identity politics.

Viviette Applewhite took two public buses to the Pennsylvania Department of Transportation office on her own.  In its filing on her behalf, the ACLU insisted the elderly civil rights movement veteran whose purse was stolen years ago and lacks a birth certificate “has been unable to obtain photo identification required by Pennsylvania’s photo ID law” and “will no longer be able to vote.”

Yet a frayed, partially legible Medicare card and copies of correspondence from Pennsylvania’s welfare office and elsewhere was enough for the clerks to give Applewhite the ID she can use to vote in November.

The ACLU, planning to appeal the ruling, is unsure if Applewhite will remain a plaintiff. The answer seems obvious.

This episode should end all arguments that voter ID is voter suppression.  Applewhite’s ability to easily get an ID card is a complete repudiation of the vicious campaign of deceit against voter ID that has seen ample plays of the race card (Applewhite is black) and the age card (she is 93 and uses a wheelchair), as well as the amplification of the left’s class-warfare strategy (she is poor).

Viviette Applewhite didn’t need an army of ACLU lawyers to secure her vote — but she could have used a ride.  Therein lies the inherent irresponsibility of liberal voter ID complaints.

What happened in Philadelphia begs the question: why is the left promoting all of these lawsuits — from the Obama Administration and groups such as the ACLU — against voter ID?  I’d suggest that the real reason is that, as in past elections, the left is already looking for a way to not blame themselves for poor showings at the polls.  Rather than own up to the fact that their proposals or their performance may no longer be popular, they seem to be looking for something (or someone) else to take the blame.

Do voter ID opponents want to keep people who don’t have photo IDs from entering the 21st century?  More likely, they want an excuse. In 2000, liberals blamed their electoral loss on the design of certain ballots.  In 2004, it was electronic voting machines made by a company owned by a Republican.  With so many close races to be decided this November, it appears liberals are looking for a handy excuse to challenge their losses.

To read the entire commentary on the Daily Caller web site, click here.