ConservativeBlog.org
Posted at 17:41h in Articles, Blog by David Almasi 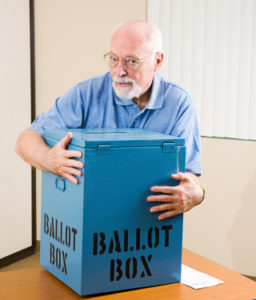 Wendy Rosen, a congressional candidate in Maryand’s 1st District, withdrew from this November’s electoral contest on September 10 over allegations that she participated in voter fraud in 2006 and 2008.

Let that sink in: a congressional candidate may have personally committed vote fraud.

But she didn’t keep it local.  An examination of voting records indicates that Rosen voted in both Florida and Maryland in the 2006 general election and the 2008 presidential primaries.

In announcing her withdrawal as a congressional candidate, Rosen said quitting in the face of possible prosecution for vote fraud was “the hardest decision I have had to make.”

Registering to vote in two states, after all, is easy.

To believe the critics of ballot protection efforts, such fraud is rare.   But it’s probably more appropriate to say that it’s hard to detect.  After all, where is the budget or the interest on the part of civil servants to check the voting record of each and every voter.  It’s much easier to find an irregularity of this sort during a candidate’s vetting process.

The suggestion of such fraud being more prevalent in the shadows seems even more persuasive when one considers that Rosen’s registration ruckus in Maryland happened almost a year to the day after another high-profile case of suspected vote fraud was uncovered just to the south in Washington, D.C.

On September 7, 2011, Andrea Pringle abruptly resigned as D.C. Mayor Vincent Gray’s deputy chief of staff — a position she was appointed to the week before — after it was revealed that she voted in the 2010 D.C. mayoral primary months after she moved from D.C. to suburban Maryland.

Again, let the gravity of this sink in: one of the mayor’s top aides may have knowingly voted illegally (in this case, probably for her future boss).

Pringle claimed she had not yet claimed her North Bethesda home as her official residence.  Mayor Gray tried to explain away Pringle’s voting where she didn’t live as “an honest mistake.”  It nonetheless cost Pringle her job and caused the already-embattled Gray Administration to suffer yet another hit to its credibility.

Critics of polling place protections such as cleaning voter lists of the deceased and the relocated or asking for proof of identity when voting decry these ballot integrity efforts as cynical — even racist — attempts to disfranchise voters.

Here are two cases, however, where the electoral process was compromised by people who voted in elections where they should not have been allowed to vote.  Rosen and Pringle cancelled out the votes of honest and earnest citizens by not following the rules.

Pringle was caught by a community watchdog group.  Rosen’s candidacy likely led to her downfall.  They were both high-profile individuals when their double lives were discovered.  While their political notoriety naturally means they should have known better, it also raises speculation of how much similar bad behavior takes place under the radar with less well-known participants.

For example, Project Veritas sent people into dozens of New Hampshire polling places earlier this year — during the state’s presidential primary — to attempt to obtain the ballots of recently deceased individuals still on the voter lists.  On only one occasion were they denied a ballot, and that case was only because the polling place worker knew the dead person the Project Veritas investigator was impersonating.

With convictions common in false voter registration scams and an estimated 1.8 million dead voters still on voter lists, how much other “ghost voting” is undetected?

Wendy Rosen won her congressional primary earlier by only 57 votes.  Of all people, she should be aware of how a small amount of fraud can have big implications.  And for her, with bipartisan criticism of her action, it’s hopefully a lesson she will never forget.

To those knee-jerk critics of safeguards for American votes, it shows that their wild-eyed accusations are both ill-conceived and perhaps even cynical in their own way.  After all, the danger is clear and present.  To stand in the way of commonsense reform is complicity in fraud.