ConservativeBlog.org
Posted at 11:12h in Articles, Blog by David Almasi 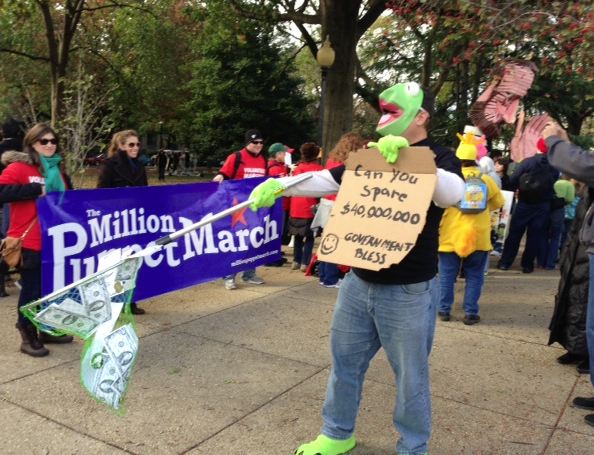 Begging in public parks is OK if it’s for public TV. Honest!

Literally hundreds of people showed up to the Million Puppet March in Washington, D.C. on November 3. 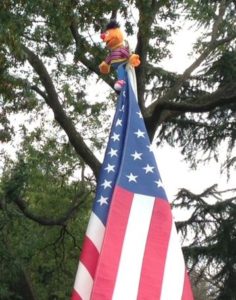 Like many liberal events, there were the initial problems with semantics.  It was originally called the Million Muppet March, but was later expanded — like what were once “gay rights” events are now acronymed into an LGBT (lesbian, gay, bisexual and transvestite) events — to be inclusive to all puppet-Americans and their supporters.

Overall, it failed to produce the thousands who RSVPed on the events Facebook page.  Epic fail!

The aim of the event was quite simple.  People who still want the Cookie Monster and his friends to be able to raid the federal cookie jar — despite the fact that the actor who plays Big Bird pulls down over $314,000 a year — converged by the dozens on Capitol Hill’s Lincoln Park.  From there, they planned to trek 11 blocks west to the U.S. Capitol to make their case for keeping the taxpayer spigot flowing so that certain programming can remain unencumbered by the free market. 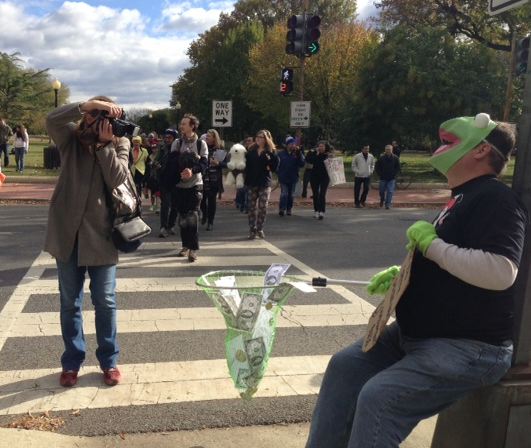 You’ll take my photo, but you won’t buy me a hot meal at Morton’s!!

I decided to crash the party by dressing up as Kermit the Frog, probably the most-beloved muppet behind Big Bird.  My One-Percenter Kermit, however, was uncouthly acting like a homeless man — begging for $40 million.

Let me tell you — these people don’t get subtle humor.  Maybe it’s because most of them were government employees (we are in Washington, after all), but it seemed as if most of the ralliers thought that asking for $40,000,000 — a number I just made up because it was large — was perfectly legitimate.  Right on!  Welcome to our rally.  We’re proud to march with you, brother. 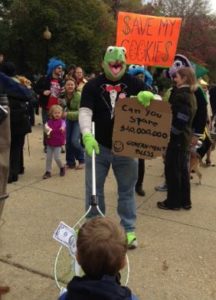 Never mind that our children and their children are going to be paying for today’s spending.  Amen to keeping the public TV trough filled with income that hardworking Americans could put into homes, educations and savings as well as money borrowed from China.

Someone who did get that I was not really one of them asked me to explain where people could go for quality programming if PBS ceased to exist.  To follow is our approximate back-and-forth:

ME: Ever hear of Nickelodeon — a channel that would likely scoop up Sesame Street in a New York minute?

ME: Why is our local public TV channel showing “Rocky” tonight?  Why is a channel that is supposed to provide me with things I allegedly cannot get anywhere else airing an Oscar-winning film that remains quite popular over 35 years after it was released?

ME: All those British shows they have on Saturday nights have also been run on BBC America and are only run again and again and again because they are popular with donors.  You know, the One-Percenters.

ME:  C-Span and the networks ran the political conventions and the presidential debates.

I think I made my point.

Puppets are fun.  “Sesame Street” is not evil.  And that show, in particular, would easily thrive in the free market.

Yet there is this liberal myth that a cutback in funding for public broadcasting (even though it is simultaneously claimed that it’s only a small part of the overall PBS budget) would result in the immediate cancellation of “Sesame Street” and the death of all culture in the United States. 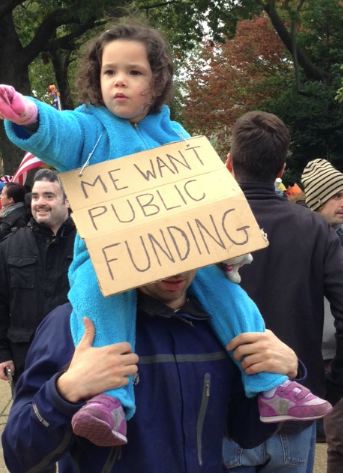 This needs no caption. It says it all. Sigh.

Almost three-quarters of American pay for their television programming.  Some people stream it on-line for free or a nominal fee.  Netflix.  One of the first acts of the Obama Administration was to ensure that subsidies were available so that the poor could continue to get free broadcast TV after the switch to digital transmission.

There’s not a lack of programming — there’s a glut of it.  It’s something that’s lost on the puppets in Lincoln Park. 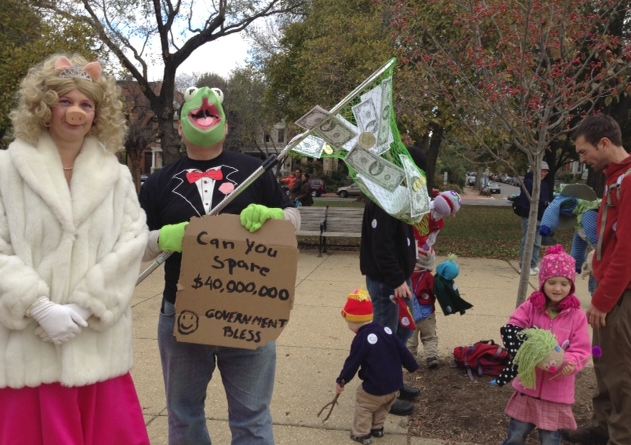 She wasn’t with me, but certainly helped make the point. I said subtlety wasn’t one of their strengths.