ConservativeBlog.org
Posted at 09:00h in Articles, Blog by The National Center

The same week that the movie I, Pencil premiered to rave reviews in one section of DC, in another part of town others were calculating just how many restrictions were tying up free people attempting – often futilely – to create and build free markets. 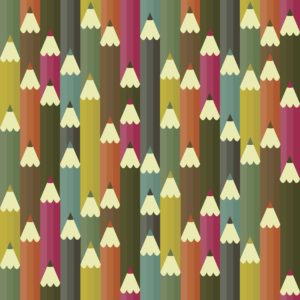 I, Pencil is based on the classic 1958 essay by Leonard E. Read, the founder of the Foundation for Economic Education.  If you’ve read this essay before, it’s time to read it again.  If you missed it, it’s short and well worth your time.

Economist Milton Friedman wrote an intro to Read’s essay in 1980 in which he praised Read for “keeping alive, in the early days, and then spreading the basic idea that human freedom required private property, free competition, and severely limited government.”

I, Pencil, the movie, was created by filmmaker Nick Tucker with screenplay by Nicole Woods Ciandella who blogs at Free Market Feminism. The movie’s breathtaking illustrations are the work of Berkeley artist Jen Oaks.

So, while I, Pencil held its “black tie optional” premiere in one part of DC, others were busy in another section of town counting all the restrictions on the free market.

After you watch I, Pencil, visit their work of art: the Mercatus Center’s database, RegData, a project dedicated to fine-tuning the art of tracking suffocating regulation. It reveals just how severely governments now limit the once-free market. 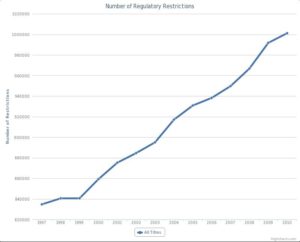 RegData tells us we’ve passed the one-million-restriction mark with about 15% of these laws focusing on “environmental” protection in general. With a million restrictions now on the books at just the federal level, can anyone claim that the free market is really free anymore? Use RegData to create charts and you’ll be shocked to see the regulatory burden we all bear.  In 1936, the Federal Register published about 2,600 pages a year.  Now it’s pumping out about 80,000 pages annually, representing about 4,000 new national laws each year.  The states are even worse, passing about 10 times that many laws, about 40,000 state restrictions annually.

Where Have All the Cowboys Gone? 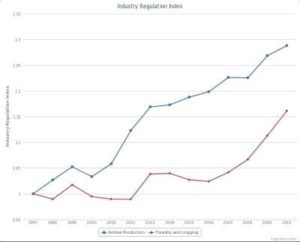 The database reveals a heavy regulatory burden on those involved in forestry and ranching. It’s no surprise these industries are in serious decline.

RegData also tracks the source of the restrictions, revealing that many are coming not from Congress, our official national regulatory body, but from the President’s Administration.

While Congress seems to have abdicated its responsibility to regulate carefully, bureacracy is busy creating more bureacracy. 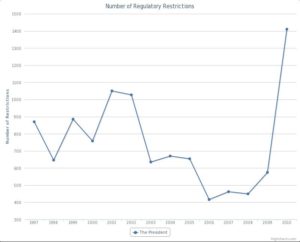 Scott Jacobs of Jacobs, Cordova & Associates works with governments on regulatory reform internationally.  According to Jacobs, we are in the Golden Age of Regulation, restricting people’s lives faster than anyone can keep up.

But regulatory failure is rampant, says Jacobs, with over 80% of regulations failing to solve the problem they were designed to address.

After announcing a massive clean up of regulations suffocating individual freedom, the Greek Prime Minister lamented:

We built a world of bureaucracy and lust for power, a world of corruption, of small and big privileges and interests for anyone who could take advantage of other people.

In other words, government is being used to build regulatory battering rams for one group of special interests to pummel another.

Hope on the Horizon

There is hope for reform.

In the United States, we’ve seen action at the state level to reduce the burden on “cottage cooks,” those creating new products in their own kitchens.

And both 2012 U.S. presidential candidates praised the basic human right to freely buy and sell in the free market.

According to Jacobs, countries around the world are taking a “regulatory guillotine” approach to quickly rid their books of centuries of layers of suffocating regulation:

How China Became Capitalist, by Nobel Prize-winning economist Ronald Coase and Professor Ning Wang, reveals that Communist China only passed 229 national laws between 1978 and 2008.  Even more surprising, only eight pre-1978 laws are still in use in China.

Can you imagine what cleaning up our regulatory house might do for us here in the United States, for free people all around the world?

I hope you’ll email the I, Pencil link to your children and grandchildren today.

It will give them hope that, one day, their dreams will come true! 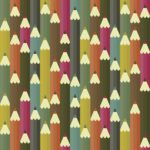