26 Nov 2012 Ask the White Guy: Does the Diversity Industry Make Stuff Up?

ConservativeBlog.org
Posted at 08:39h in Articles, Blog by Amy Ridenour 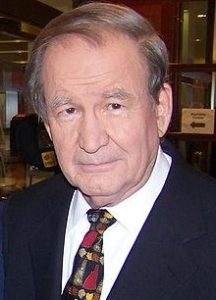 When the first thing you see about someone is their skin color, you miss a lot.

That’s one of my conclusions after reading the bizarre attack on conservative commentator Pat Buchanan in the column, “Ask the White Guy: Did White America Die With This Election?,” in Diversity, Inc. magazine.

Answer: Don’t get angry; take solace in what we are witnessing. Buchanan is a bigot–a racist, anti-Semitic creep. He’s chronologically old, but he’s one of those people who was born a bitter, ugly, little, shrunken, mean, horrid old man.

The first thing anyone who follows national commentary and commentators even nominally would say is, “that doesn’t sound like Pat Buchanan to me.”

The second thing a person might say, following the source link provided, is that it doesn’t make sense that Buchanan said this on the G. Gordon Liddy radio show on November 7, since Liddy retired months ago.

The third thing that struck me is that Diversity Inc.’s source is a satire website.

And the fourth thing to strike me is that Diversity Inc. doesn’t appear to realize that. The columnist — who happens to be Diversity Inc.’s founder and CEO Luke Visconti, not an intern — didn’t check.

Diversity Inc. says its “mission is to bring education and clarity to the business benefits of diversity.”

I take it that means skin color, not diversity of thought. Heaven forbid that we Americans practice non-conformist diversity.

I posted a comment on Visconti’s column’s webpage, a comment which as of this writing is “awaiting moderation.” I questioned Visconti’s admiration for LBJ, a virulent racist, even as he slammed Buchanan for comments Buchanan never made. I then wrote a second comment to draw attention to the fake nature of the attack on Buchanan. That one seems to have vanished. (Perhaps only one comment per person is permitted?)

Regardless, surely by now someone else has pointed out to Diversity Inc. that it has attacked Pat Buchanan based on a made-up satire piece. A correction is very much called for.

If Diversity Inc. has any respectability, it will promptly issue a correction and make a formal apology to Mr. Buchanan. It will be interesting to see if Mr. Visconti has that much integrity.