03 Feb 2013 The Unprosecutable Killing of a Wanted Child 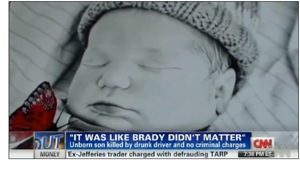 Do “pro-choice” activists really want abortion to be safe, legal and rare (the last word implying that abortion is not morally preferable), as their PR machine would have us believe?

Or are they, at best, ambivalent about the fact that abortion — at the very least — ends the development of a human life?

A clue may be found in the Colorado legislature this past week, where Democrats in that state’s legislature killed legislation to make it a prosecutable crime to end the life of an unborn baby during the commission of a crime.

The group was heading home from a prenatal visit to the doctor for Heather and her son, named Brady Paul, whose delivery was days away.

All required hospital care. When Heather Surovik woke up in intensive care, she learned Brady had not survived.

Later, she learned Colorado law does not permit prosecutors to charge the drunk driver for the death of an unborn child. For damage to the car, yes. For the loss of Brady, no.

You see, although Brady was perfectly capable of thriving outside the womb, he hadn’t taken a breath before he was killed. Had he inhaled, even once, his death would have been a prosecutable crime in Colorado.

The legislation designed to change this would seem to be a no-brainer, but Colorado’s “abortion rights” community and Democrats in the legislature were staunchly against it, believing that any state law respecting the life of an unborn baby killed in the commission of a crime could somehow overturn Roe. v. Wade.

The Republican bill, from Rep. Janak Joshi of Colorado Springs, refers to ‘proximate cause of death or injury to an unborn member of the species homo sapiens,’ which critics said was a back-door attempt to outlaw abortion and mimicked ‘personhood’ efforts that have failed at the ballot.

A Democratic-controlled House committee killed Joshi’s measure 7-4 in a move that was praised by Planned Parenthood Votes Colorado.

‘We are grateful to our lawmakers who recognized the dangers of this bill,’ said Cathy Alderman, vice president of public affairs.

Never mind that no state legislature can overturn a Supreme Court decision, or that 38 states, including, ironically, Colorado under other circumstances, have some form of fetal homicide law without outlawing abortion.

Testifying against the measure to make the death of unborn babies during the commission of crime prosecutable, an “abortion rights” advocate refused even to acknowledge Brady Surovik’s life had been lost, stubbornly calling 8 lb., 2 oz.* Brady just “a pregnancy.”

A “pregnancy” who would be sitting up and eating semi-solid foods by now, that is, except for the actions of a drunk driver.

Colorado Democrats say they would support legislation that makes killing an unborn baby while committing a crime illegal, but only as a crime against the baby’s mother. They oppose acknowledging that the unborn child himself has lost his life, or even that the unborn child’s father has suffered from the loss of his offspring.

After the legislation was defeated, Brady’s mother filed a proposed amendment to the constitution of Colorado calling for, as reported by the Denver Post, “fetal homicide laws to at last be applied to unborn victims of violence in Colorado.”

Abortion advocates market what they support under slogans such as “every child a wanted child.”

The photo above is a screenshot of a CNN report on the case, viewable on YouTube here.