10 Apr 2013 The ObamaCare Exchanges Are Unfair

ConservativeBlog.org
Posted at 08:37h in Blog, Health by David Hogberg

Last week I was in a radio debate with Kathleen Stoll of the pro-ObamaCare FamiliesUSA about the ObamaCare exchanges.  The rules surrounding the exchanges require everyone to buy insurance or pay a fine, the intent being to compel young people into buying insurance on an exchange.  The rules also prevent insurers from adjusting premiums for health status and restrict their ability to adjust premiums for age.  The result will be that the young and healthy pay higher premiums to help subsidize lower premiums for the older and sicker. 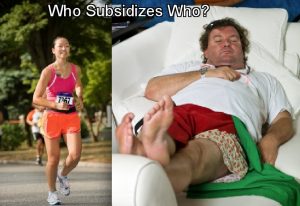 Stoll thought this was fair, claiming it was the “fairest system, and most helpful over [people’s] lifespan if they don’t move into employer-based insurance.”  She elaborated further by saying,

The idea is while you’re young and healthy you are paying into the system and its common pool and as you grow older you will benefit from having been in that system by having affordable insurance…The key here…is over a person’s life span as they grow older and they need comprehensive insurance—because we all grow older, we all get sick and have health problems—as you get older insurance will get cheaper.

But does that make the exchanges fair?  Not really.  In fact, it makes them quite unfair.  Let’s count the ways.

First, it means that young people who are just starting out in life and usually have relatively limited incomes will be subsidizing older people who are usually in their peak earning years.  In other words, the exchanges shift the burden of paying for insurance from people who have the most means to do so to people who have far less means.  I’m pretty sure that qualifies as unfair.

Next, by preventing insurers from adjusting for health differences, the marathon runner will, in effect, be subsidizing the couch potato.  Granted, some people have health problems through no fault of their own, and some people are healthy because of little more than good genes.  But that does not change the fact that people who eat healthy and exercise regularly will be subsidizing the insurance for those who eat junk food and are sedentary.  Again, not fair.

Well, you might be saying, at least this seems fair to people who are very ill through no fault of their own and are struggling.  But Michael Cannon of the Cato Institute points out that the exchanges incentivize insurers to mistreat those people:

[ObamaCare’s] “community rating” price controls force insurers to sell coverage to the sick far below  cost, and to the healthy far above cost. In that  environment, an insurer that provides the highest-quality care to the sick will attract all the sickest patients, and will quickly go bankrupt, as healthy people avoid that carrier’s higher premiums. In this way, the Act’s community-rating price controls literally punish health plans that provide the most attractive coverage to the sick. The Act thus forces health plans into a race to the bottom, where insurers compete to avoid, mistreat, and dump the most vulnerable patients.

In short, the exchanges are unfair to vulnerable patients too.

(BTW, if you haven’t read Cannon’s “50 Vetoes” paper, from which that quote comes, do so.  It is an excellent resource on the weaknesses of ObamaCare.)

Of course, no system is perfectly fair.  The best we can do is create a system that maximizes fairness and minimizes unfairness.  On that standard, though, the ObamaCare exchanges don’t even come close.