ConservativeBlog.org
Posted at 05:31h in Blog, Health by David Hogberg

Anyone who makes between 133% and 400% of the federal poverty level is eligible for a premium subsidy to purchase insurance on an ObamaCare exchange.  However, just because you are eligible  doesn’t mean you will qualify.

The applicable percentage is the percentage of your income that you must pay toward your insurance before you qualify for a premium subsidy.  It is a sliding-scale, which means those closer to 133% of FPL will pay a small percentage of their income for insurance.  From there it increases until one reaches 400% of FPL.  To put it into actual dollars, someone making $20,000 annually will have to pay about 5.11% of his income, or $1,021, to the cost of insurance before he is eligible for a subsidy.  Someone making $30,000 annually will have to pay 8.37% or $2,512, and so on.  Those amounts are then subtracted from the second lowest-cost silver plan to determine the premium subsidy.

Here a hypothetical situation:  The applicable percentage for a 27-year-old making $28,155 annually (245% of FPL) is about 7.98%, or $2,218 of his income. That’s the amount he pays toward the cost of a premium on the exchange.  The problem is that the second lowest-cost silver plan on the exchange is also $2,218.  Since his applicable percentage is the same as the silver plan, he receives no subsidy.

Well, ok, I lied.  That’s not hypothetical.  It’s the exact situation that a 27-year-old faces if he is to buy insurance from the Washington, DC Exchange.  The DC Exchange just released some early rates, and the second lowest-cost silver plan (Kaiser HMO) is $184.85 per month, or $2,218 annually.

In the table below I’ve listed (1) the premium amounts for the second lowest-cost silver plan for those ages 18-40 in DC; and (2) The incomes at which the applicable percentage equals the premium.  All people who have incomes at that level or above will not receive any subsidy as the prices on the DC exchange now stand, even though many are well under 400% FPL.

The implication of this is that many relatively young and healthy people will be paying full-price for any plan on the DC exchange.  And since the price all of the plans are greater than the fines for not buying insurance ($95 in 2014, $395 in 2015, $695 in 2016 and beyond), the young and healthy will have a considerable financial incentive to not participate in the exchange.  And if that happens, the exchange will experience a “death spiral.” For more on that concept, see my recent paper, “California’s Coming Health Insurance Death Spiral” 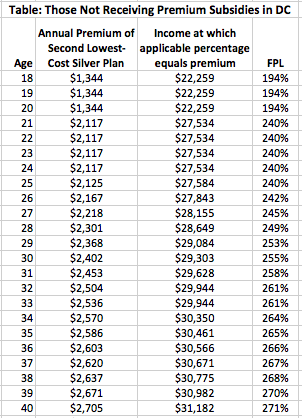