ConservativeBlog.org
Posted at 00:02h in Blog by David Hogberg

Peter Orszag is at it again, defending the death panel Independent Payment Advisory Board against an attack by, of all people, Howard Dean.  However, what’s most interesting about the article is Orszag’s contention about the causes of the recent slowdown, to 2.7%, of the growth in Medicare this year:

One reason costs have been rising so slowly is that systems for paying hospitals and doctors are changing. We’re moving away from the old fee-for-service plan and toward paying for value in health care — and we’re making the shift more rapidly than expected.

It’s not entirely clear what Orszag means by “paying for value” although presumably he means the “Medicare experiments with accountable care organizations [ACOs], bundled payments and other new strategies” that he mentions later on.  I emailed him for an explanation last week and for the data to back up those claims.  Thus far, no response.  So, for the sake of argument, let’s assume he does mean ACOs and bundled payments.

That’s odd because so far those efforts are a tiny portion of Medicare’s operations.  At the beginning of the year, about 1.6 million Medicare beneficiaries were enrolled in ACOs, which amounts to about 3% of all Medicare beneficiaries.  What impact such a small number of enrollees would have on costs is debatable.  That assumes, of course, that ACOs will reduce costs.  Looking at early evidence, such as the Pioneer ACO model, shows mixed results at best on cost saving.  Only 18 of the 32 organization involved in the demonstration saved money.  Of those, only 13 saved enough money to share some of the savings with Medicare. 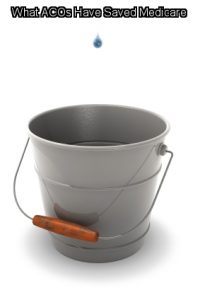 An article in Modern Health Care notes that nine organizations will no longer continue in the program.  It also notes the savings to Medicare from the ACOs that reduced costs was about $33 million.  Medicare spent about $572 billion in 2012, which means that the $33 million saved by the ACOs are responsible for about .006% of the slowdown in Medicare spending.

Regarding bundled payments, Medicare’s four bundled payment experiments only began this year, and as of yet we have no data on whether they are saving costs.  And even if they were, the effect on the entire system would be small, since only 114 organizations serving Medicare beneficiaries are involved.

Then there is the Advance Primary Care Practice Demonstration which has been going on since 2011.  However, with only 195,000 Medicare beneficiaries enrolled, it’s doubtful it is having much impact on costs either.

It would sure be nice if Orszag would back up the grand claims he makes for Medicare’s new delivery methods with some actual evidence.  But then, maybe there isn’t much evidence for those claims.