ConservativeBlog.org
Posted at 04:51h in Blog, Health by David Hogberg

I haven’t yet tried setting up an account on the Washington, D.C. exchange, but I have tried its calculator function.  A few days before the D.C. exchange opened, Reuters reported that it would “be unable to calculate the size of federal subsidies.”  And, guess what? It can’t.  Or, more accurately, it can’t calculate them, well, accurately. 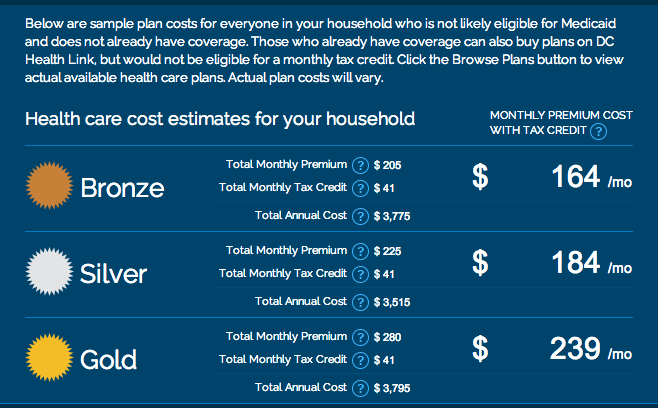 Assuming that the Silver plan being quoted is the one on which the subsidy is based, then the 28-year-old making $25,000 annually should get a subsidy of about $81 a month, not $41.  Is it possible that the calculation is based on a lower-cost Silver premium than the one displayed?  Yes, but in that case the Silver premium would be about $185 a month, $20 less than the cost of the above Bronze plan—something that is very unlikely.  (For those of you who want to see the math, it’s at the end of this post. And for those of you who don’t want to see the math, don’t worry, it’s at the end of the post.) 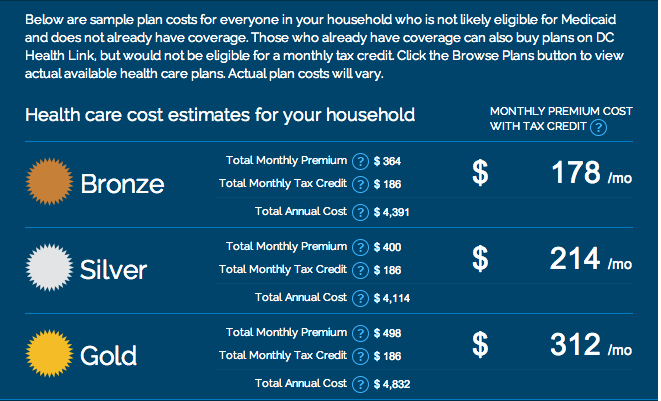 It appears that the calculator consistently yields a subsidy that is too low.  Assuming that higher subsidies would attract more business, and assuming that the lower cost of insurance as a result of the subsidy would appeal most to the younger and healthier crowd, this is another “glitch” that will exacerbate the death spiral.

Finally, you may notice that the “Total Annual Cost” in each case equals more than the monthly premium multiplied by 12.  If you click on that part on the website, it explains that Total Annual Cost is the premiums plus estimated out-of-pocket costs.  Of course, since it can’t accurately calculate the subsidy—which means the price of the premium is also wrong—then chances are good that the number listed for Total Annual Cost is wrong too.