ConservativeBlog.org
Posted at 13:02h in Blog, Health by David Hogberg 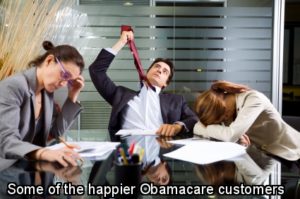 Jessica Sanford, the Federal Way woman who got a shout-out from President Obama last month with her fan letter for the Affordable Care Act, got a rather rude awakening last week. Turns out she doesn’t qualify for a tax credit after all.

At least that’s what the letter said that she got from the state. Now she says her dream of affordable health insurance has gone poof. She can’t afford it. She’ll have to go without. “I’m really terribly embarrassed,” she says. “It has completely turned around on me. I mean, completely.”

She’s far from the only one:

About 8,000 Washington Health Benefit Exchange applicants will get smaller federal tax credits for their health insurance than originally anticipated because of computer problems on the federal and state health insurance websites.

There were warnings that this could happen.  But if there is one constant in all of this it’s that warnings are routinely ignored by officials.

And here is the best part of that article:

People affected by the error will receive a letter from the state including the updated information on tax credits, according to a press release from health exchange administrators. Officials are discouraging people from calling the state customer support center for information.

Government customer service: We’re here to help you—unless we screw up.  Then, please, don’t call us.