27 Nov 2013 If Organizing for America Accosts You at the Thanksgiving Table, Be Aware: Life Expectancy and Infant Mortality Statistics DO NOT Mean We Need ObamaCare

ConservativeBlog.org
Posted at 09:39h in Blog, Health by Amy Ridenour 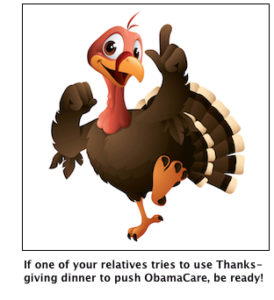 In their increasingly desperate attempts to find a way to defend the accumulating disasters of ObamaCare, I’ve heard more than a few liberals in recent days make the claim that, problems or not, ObamaCare is better than the status quo.

Their argument frequently rests on the oft-cited, but thoroughly misunderstood, claim that the U.S. health care system isn’t good because other first world nations have better life expectancy and infant mortality statistics.

If you find yourself debating a liberal who makes this claim (possibly during Thanksgiving dinner?), don’t fall for it.

A few years back, the National Center’s David Hogberg wrote a paper, “Don’t Fall Prey to Propaganda: Life Expectancy and Infant Mortality are Unreliable Measures for Comparing the U.S. Health Care System to Others,” that supplies necessary context.

For example, in response to the liberal claim that U.S. infant mortality statistics are poor compared to those of other first-world nations, David writes:

…infant mortality tells us a lot less about a health care system than one might think. The main problem is inconsistent measurement across nations. The United Nations Statistics Division, which collects data on infant mortality, stipulates that an infant, once it is removed from its mother and then “breathes or shows any other evidence of life such as beating of the heart, pulsation of the umbilical cord, or definite movement of voluntary muscles… is considered live-born regardless of gestational age.” While the U.S. follows that definition, many other nations do not. Demographer Nicholas Eberstadt notes that in Switzerland “an infant must be at least 30 centimeters long at birth to be counted as living.” This excludes many of the most vulnerable infants from Switzerland’s infant mortality measure.

On life expectancy comparisons, David has plenty to say, including this:

More robust statistical analysis confirms that health care spending is not related to life expectancy. Studies of multiple countries using regression analysis found no significant relationship between life expectancy and the number of physicians and hospital beds per 100,000 population or health care expenditures as a percentage of GDP. Rather, life expectancy was associated with factors such as sanitation, clean water, income, and literacy rate.

But why isn’t America’s life expectancy statistic better than it is? David explains:

The primary reason is that the U.S. is ethnically a far more diverse nation than most other industrialized nations. Factors associated with different ethnic backgrounds – culture, diet, etc. – can have a substantial impact on life expectancy. Comparisons of distinct ethnic populations in the U.S. with their country of origin find similar rates of life expectancy. For example, Japanese-Americans have an average life expectancy similar to that of Japanese.

A good deal of the lower life expectancy rate in the U.S. is accounted for by the difference in life expectancy of African-Americans versus other populations in the United States. Life expectancy for African-Americans is about 72.3 years, while for whites it is about 77.7 years. What accounts for the difference? Numerous scholars have investigated this question. The most prevalent explanations are differences in income and personal risk factors. One study found that about one-third of the difference between white and African-American life expectancies in the United States was accounted for by income; another third was accounted for by personal risk factors such as obesity, blood pressure, alcohol intake, diabetes, cholesterol concentration, and smoking and the final third was due to unexplained factors. Another study found that much of the disparity was due to higher rates of HIV, diabetes and hypertension among African Americans. Even studies that suggest the health care system may have some effect on the disparity still emphasize the importance of factors such as income, education, and social environment.

President Obama’s Organizing for America group has somewhat infamously encouraged its supporters to use the occasion of Thanksgiving dinner to convince reluctant relatives that the unfolding disaster that is ObamaCare is still better than the health care system we have today. If you are expecting one of your relatives to follow Obama’s script, I suggest you read David’s entire paper before you sit down to dinner.