24 Feb 2014 If You Like Your Cancer Medication, You Can Keep Your…Er, Never Mind

ConservativeBlog.org
Posted at 02:22h in Blog, Health by David Hogberg

Over the weekend Stephen Blackwood told the rather harrowing story of his mother and her experience with ObamaCare.  “Carcinoid, a form of neuroendocrine cancer,” Blackwood writes in the Wall Street Journal, “is a terminal disease but generally responds well to treatment by Sandostatin, a drug that slows tumor growth and reduces (but does not eliminate) the symptoms of fatigue, nausea and gastrointestinal dysfunction. My mother received a painful shot twice a month and often couldn’t sit comfortably for days afterward.”

And then in November, along with millions of other Americans, she lost her health insurance. She’d had a Blue Cross/Blue Shield plan for nearly 20 years. It was expensive, but given that it covered her very expensive treatment, it was a terrific plan. It gave her access to any specialist or surgeon, and to the Sandostatin and other medications that were keeping her alive.

And then, because our lawmakers and president thought they could do better, she had nothing. Her old plan, now considered illegal under the new health law, had been canceled.

When they finally found a plan with Humana that looked like it would cover Sandostatin, she called Humana.  It turned out that the enrollment agents didn’t have access to the drug formularies and so could not confirm that Humana covered Sandostatin. 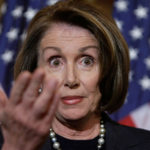 WASHINGTON – DECEMBER 15: U.S. Speaker of the House Rep. Nancy Pelosi (D-CA) speaks during a news conference on Capitol Hill December 15, 2008 in Washington, DC. Pelosi summed up issues the House has worked on during the past 12 months of the 110th Congress. (Photo by Alex Wong/Getty Images)

[The enrollment agents] said the only way to find out in detail what was in the plan was to buy the plan. (Does that remind you of anyone?)

With no other options, she bought the plan and was approved on Nov. 22. Because by January the plan was still not showing up on her online Humana account, however, she repeatedly called to confirm that it was active. The agents told her not to worry, she was definitely covered.

Then on Feb. 12, just before going into (yet another) surgery, she was informed by Humana that it would not, in fact, cover her Sandostatin, or other cancer-related medications. The cost of the Sandostatin alone, since Jan. 1, was $14,000, and the company was refusing to pay.

By the way, didn’t someone tell us that people like Blackwood’s mom that if they were losing their “substandard” plan to just shop around on the exchange?