270 of these dead voters, the paper says, are still lively when it comes to voting. One of them has voted 14 times, at least one other, twice, since passing on to their eternal reward. 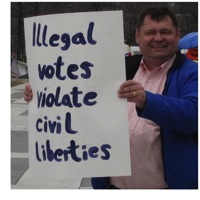 Nearby Suffolk County, Clark reports, has 2,490 dead voters on its rolls, with 50 voting since their death. Across the state, 26,500 dead voters remain on the voting rolls, the paper says.

What’s more, across New York, 842,000 registered voters have not voted in more than ten years. Many of these people are likely to be voting elsewhere now, but they are still eligible to vote in New York.

The paper opines that clerical errors, not fraud, is likely to be the reason dead voters have voted in New York. Possibly so — although it is definitely odd that one dead man has had 14 clerical errors happen to him.

The fact that more than three quarters of a million voters may still be listed as eligible to vote when they aren’t lends itself to the conclusion that government officials are not making clean elections a priority.

“Voter fraud doesn’t exist,” said Ed Schultz of America’s “Progressive Community,” MSNBC, in the video clip above. With possibly as many as 842,000 ineligible voters still listed as eligible in just one state, how can he possibly know that’s true?

ConservativeBlog.org / May 17, 2022
Disney is no longer the happiest place on earth. Backing down to the protests of leftist employees, special interests and media commentators, the House of …
READ MORE

ConservativeBlog.org / May 16, 2022
When it comes to the machinations of the Biden White House, you can’t make this stuff up. You seriously cannot do it. As Project 21 …
READ MORE

New Visions Commentary / May 15, 2022
House Speaker Nancy Pelosi has a Defund the Police problem. “Make no mistake, community safety is our responsibility,” Pelosi told ABC’s George Stephanopoulos during an interview on Sunday. “I quote one my …
READ MORE
The National Center for Public Policy Research is a communications and research foundation supportive of a strong national defense and dedicated to providing free market solutions to today’s public policy problems. We believe that the principles of a free market, individual liberty and personal responsibility provide the greatest hope for meeting the challenges facing America in the 21st century.
Learn More About Us
Subscribe to Our Updates