ConservativeBlog.org
Posted at 03:52h in Blog, Health by David Hogberg 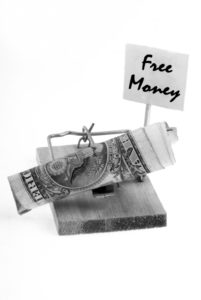 Sally Kohn of the Daily Beast points to some new state polls showing that majority in those states favor Medicaid expansion.  From this she concludes: “A core part of Obamacare is popular in states from Kansas to Georgia where Republicans are blocking it. They’ll pay come November.”

Uh, yeah.  No doubt Democrats will want to hit Republicans over the head for not going ahead with the ObamaCare Medicaid expansion thereby reminding voters that they, the Democrats, support Obamacare.  Good luck with that!

On a more serious note, the polls, conducted by Public Policy Polling do find majorities in Florida, Georgia, Kansas, Kentucky, Maine, Pennsylvania and a plurality in Virginia are in favor of Medicaid expansion: 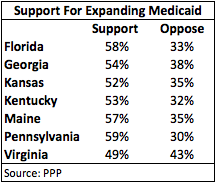 But here is how PPP asks the question (the same for all states): “Kansas is eligible to receive new federal funding to pay for health care through the Medicaid program. Do you think the Kansas state government should accept this federal funding to expand Medicaid coverage, or not?”  That comes pretty close to suggesting that it is free money.  Of course, there is no such thing.  What if the question mentioned that within a few years the state would have to kick in 10 percent of the cost and there is no guarantee that it won’t be more in future years?  Or perhaps PPP could have mentioned that expanding Medicaid means paying higher federal taxes and/or more federal debt?  Mentioning trade-offs in poll questions usually produce different results, sometimes dramatically. And, of course, there are always trade-offs.