ConservativeBlog.org
Posted at 11:49h in Articles, Blog by David Almasi 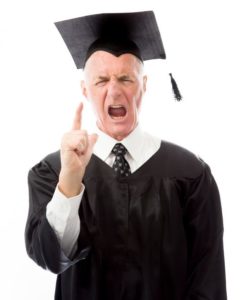 On the right as well as the left, political protests led to the cancellations of speakers.  For example, Bush Administration secretary of state Condoleezza Rice bowed out of giving the commencement address at Rutgers University because of anger on campus over her participation in the Global War on Terrorism.  At Haverford College, former University of California at Berkeley chancellor Robert J. Birgeneau pulled out because Occupy Wall Street sympathizers made a stink about treatment of radicals at that very liberal campus.

Someone who hasn’t raised eyebrows despite his actual questionable performance as a commencement speaker is Obama Administration Attorney General Eric Holder.  At Morgan State University earlier this month, Holder used the honor of addressing the graduates of this historically-black university to announce that a better America is being withheld from minorities because there are remaining vestiges of institutional racism that have yet to be defeated.

It was an odd admission by Holder of his own failure on a day that should have been focused on success.

Mentioning the recent media frenzy over unfortunate statements about race made by Los Angeles Clippers owner Donald Sterling and embattled Nevada rancher Cliven Bundy, Holder warned that obsessing on the spectacular causes people to overlook the bigger problem — that people are now “likely to miss the more hidden, and more troubling, reality behind the headlines.”

Can’t see this racism?  Holder obviously has a gift for seeing it — it’s a talent he seems to share with other members of the liberal elite.  “But discrimination does not always come in the form of a hateful epithet or a Jim Crow-like statue,” he said.  “And so we must continue to take account of racial inequality, especially in its less obnoxious forms, and actively discuss ways to combat it.”

Horace Cooper, the co-chairman of the National Center’s Project 21 black leadership network, takes issue with Holder’s apparent quickness to find a racist boogeyman under the bed who can be blamed as the source of so many of America’s problems.

Horace — a former staffer to congressional leadership, high-ranking federal official and constitutional law professor — notes that times are tough and things are particularly hard for black Americans.  But Horace says that Attorney General Holder and the rest of the Obama Administration, as well as their supporters elsewhere, have a lot to answer for when it comes to the source of this black misery.

In an upcoming New Visions Commentary from Project 21 that is set for early June publication, Horace notes:

Exactly what struggle was Holder referring to?  This presidency has certainly served up its own heaping portion of pain for at-risk Americans.  Tragically, they’ve harmed many of the very groups they claim to protect.  Under this administration, which is the most progressive in American history, blacks have lost ground.  In the last five years, blacks have faced higher unemployment, a greater loss in household net worth and sizable increases of other indices measuring poverty in the black community.

But let’s be clear: this is not due to racism or because of discrimination.  It is due to the poor stewardship of the nation’s economy by the very White House that claims to have minority interests at heart.

Black America, like the nation as a whole, has suffered greatly in the last five years precisely because of ambitious policies pursued by the Obama Administration that have not worked.  In fact, these policies have made things worse.

Obama can be credited with creating more Americans unable or unwilling to grab a rung on the ladder of opportunity.  This is seen in historically low workforce participation rates, augmented disability rolls, stagnant home values and falling household incomes.

It is this signature failing that is likely the primary reason why fewer black Americans voted for the President’s 2012 re-election.

Racism and discrimination are no longer primary influences over the lives of blacks and other minorities, or anyone else.  The stale policies of expanded government and heavy-handed regulation — the primary policy achievements of this White House — are far more consequential.