ConservativeBlog.org
Posted at 05:46h in Blog, Health by David Hogberg

Carl McKenzie, a psychiatric patient, had been missing for four months from the Veterans Affairs Medical Center in Salem, Virginia.  In late March, his body was finally found in some underbrush near the hospital.  That same day, a groundskeeper found patient Leonard Cunningham who had been missing since February.  Cunningham was hanging by a rope on a tree not far from where McKenzie had been found. In response, the authorities initiated a clearing of the underbrush that covered much of the facility.

In May, that effort resulted in the discovery of a skeleton.  It’s wristband revealed it to be a patient who had wandered off from the facility’s nursing home 15 years earlier.

After that, measures were taken to improve the search procedures at the Veterans Affairs Medical Center in Salem, but the effectiveness of those measures is open to debate. In December of that year, Roy Phillips, a Korean War veteran who could barely walk, went missing from the hospital.  A search was organized but was called off later that night.  Two groundskeepers found Phillips the next morning dead from exposure.

While that sounds like something that happened recently at the VA, it occurred back in 1992. 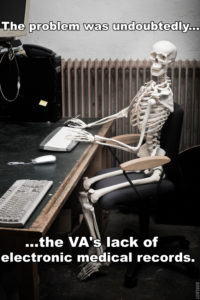 It’s no secret that the VA has had a long history of such scandals.  Ironically, though, I found the above story in Phillip Longman’s book Best Care Anywhere: Why VA Health Care Is Better Than Yours. In a piece that will be out shortly, I show how the idea popularized by Longman’s book is, in part, to blame for the VA waiting list scandal.

One of Longman’s contentions is that the VA works so well because of its computerized medical record system known as VistA.  Supposedly VistA enables physicians and other health care providers to avoid making serious, sometimes deadly, medical errors.  That makes this recent story about the VA seem rather curious:

Two psychiatric patients at a veterans facility in Brockton received no regular evaluations of their condition for years, part of a “troubling pattern of deficient patient care” that federal investigators say they have confirmed at veterans health care facilities nationwide.

One of the neglected patients at the Brockton Community Living Center who had been admitted for “significant and chronic mental health issues” was living in the 106-bed facility for eight years before he received his first psychiatric evaluation, investigators reported.

The other unidentified patient, although he was classified as 100 percent mentally disabled due to his military service, had only a single “psychiatric note” placed in his medical file between 2005 and 2013.

How good is a medical record system if it takes eight years for a patient living in a VA facility to receive an evaluation?  Granted, errors will happen even in the best record system, but that’s one pretty big error. I suspect that as this scandal unfolds we are going to find out that VistA isn’t all it’s cracked up to be.

To read more about VA disasters, a report released yesterday by Senator Tom Coburn’s is a good place to start. Here’s one example:

A nurse at the Lexington medical center was charged with killing a World War II veteran and eventually admitted fault with very little consequence. The veteran, who served in Europe, was killed by a morphine overdose at a VA Hospital in Lexington, Kentucky in September 2006. The nurse who administered the lethal dose was charged with murder. Some of the veteran’s family members said the nurse “harassed them for two years to try to get them to admit guilt” in the death. The veteran’s stepdaughter said, “the FBI was here a couple of times. They interrogated me and tried to make me say I did it and not to ruin the VA hospital’s reputation.”The court found the “additional doses of morphine provided by” the nurse “were a contributory cause of” the veteran’s death and she eventually pled guilty to involuntary manslaughter. At least two other veterans cared for by the same nurse “died under suspicious circumstances” after being given morphine, according to a special agent with the VA Inspector General (IG). The nurse was sentenced to “time served of eight days.” Eight days represent significantly less time than most veterans spend waiting to receive care at a VA center.