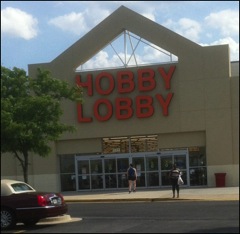 I made the following statement today regarding the Supreme Court’s decision to strike down ObamaCare’s HHS contraception mandate and uphold an employer’s right not to be forced to provide birth control and early abortion drugs and devices to employees against their conscience(s):

Today’s decision was a victory for freedom, because a person who does not have the right to order his or her professional and personal life in accordance with his or her religious beliefs does not have freedom at all. Supporters of the mandate who claimed incorporated businesses cannot exercise religion ignore that corporations are directed by human beings, and nothing in the act of incorporating strips away the humanity of business owners. There are many examples of businesses being operated under the constraints of the religious beliefs of their owners. Chik-Fil-A forgoes significant profit by closing every Sunday for religious reasons, for example. If it were not possible for a corporation to exercise religious beliefs, Chik-Fil-A would be open on Sundays. There are five key reasons Americans – women, men, liberals, conservatives, religious, atheists, users of birth control and non-users, should celebrate the Hobby Lobby decision today: freedom, finances, privacy, equality and the Constitution.

Freedom. If you believe birth control or abortion is morally wrong, you shouldn’t have to buy it for others just because you offered them a job. Under the Religious Freedom Restoration Act, the federal government can only force people to violate their religious beliefs if the government has an extremely important reason for doing so and the government cannot accomplish its goals in any less restrictive way. It is debatable whether the provision of birth control and early abortion drugs and devices is even a function of the federal government, but even if that is to be so, clearly there are other ways of distributing these easily-accessible, inexpensive drugs and devices without forcing the involvement of religious employers.

Finances. Employees and employers should have the legal right to negotiate the pay packages that work best for them. If an employee would rather be paid in cold hard cash than birth control, the federal government has no moral right to tell her she cannot negotiate such terms. Cash can buy birth control, if that is desired by the employee. It can also buy groceries. Some employees prefer groceries..

Privacy. Bosses don’t belong in bedrooms, and ObamaCare’s insistence on forcing employers to pay for birth control puts employers there – and the federal government in there with them. Employees have the right to close their bedroom doors. Nothing about this case has been more nonsensical than supporters of the contraception mandate claiming that employers who don’t want to be involved in their employees’ birth control are somehow meddling in their employees’ personal lives.

Equality. As Obama Administration’s Federal Register makes clear, the birth control mandate when imposed was never about helping low income women afford birth control: It was about enhancing the power and financial position of women relative to that of men. It is not the proper role of the federal government to try to help one group of Americans versus another. The government should stand for equality of opportunity, not sexism.

The Constitution. Americans have a First Amendment right to freedom of religion. Whenever this right is upheld, it is strengthened.

In case anyone is interested, I have written the following on the Hobby Lobby case and HHS birth control mandate: “A Quick Guide to ObamaCare’s HHS Contraceptive Mandate and Why the Supreme Court Should (and Will) Throw It Out” (March 2014), “Hobby Lobby’s Court Victory in HHS Mandate Case is a Victory for Religious and Economic Freedom: Claims of an “Attack on Women who Use Birth Control” are Foolish Leftist Spin,” (July 2013), “9 Takeaways from the Hobby Lobby HHS Contraception Mandate Oral Arguments” (March 2014), “How Can Senator Patty Murray Be So Ignorant about a Law She Voted For?” (March 2014), “White House Birth Control Statistics Don’t Add Up” (Feb. 2012), “Rep. Debbie Wasserman Schultz Tells Four Lies in One Sentence, Washington Post Grades Two Pinocchios” (April 2014), “Democrat Congresswomen Walk Out of HHS Mandate Hearing to Protest Omission of Witness Who Wanted to Talk About Something Else Entirely” (February 2012), “Catholic Bishops Cannot Accept White House ‘Compromise’ on Birth Control Without Surrendering Principles” (Feb. 2012), “16 Seconds To Understanding the HHS Birth Control Mandate” (Oct. 2012), “Should Conservatives Choose HHS Mandate, Climate Change Positions Based on What is Likely to Win the Most Votes?” (March 2014), “Would Jesus Pay for Abortions?” (Feb. 2012),” and “Obama Compromise Infringement of the First Amendment is Still Unconstitutional” (Feb. 2012).