01 Jul 2014 Does Burger King Fund ThinkProgress? And Other Questions

ConservativeBlog.org
Posted at 04:24h in Articles, Blog by David Hogberg

1. Hat tip to Kevin Williamson for linking to this year-old post from ThinkProgress.  In support of a “living wage” of $15 per hour for fast-food workers, ThinkProgress cites research from a University of Kansas graduates student saying that McDonald’s would only have to increase the price of Big Mac 68 cents to double the pay of most of McDonald’s workers.

After I picked myself up off the floor in hysterics, I listened very carefully.  I could hear not only the chorus of lefties chanting, “McDonald’s raise your prices 68 cents!,” but also owners of Burger King, Wendy’s, Jack in the Box, Taco Bell…. 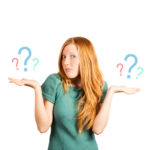 red-haired girl facing a choice isolated on a white, holding a questions marks at her hands.

2. Here is a little logic quiz for you.  Say you have a job that pays you $30,000.  Over the next ten years your income doesn’t fall below that and, by the end of that ten years, you are making $40,000.  If that was the case, could you reasonably say that by year ten you’ve recovered to the level of income you had in year one?  I suspect most of you would say “No” since you can’t recover to a level of income if you never dropped below that level in the first place.

Thankfully, we have left-wing journalists to set us straight on this. Angelo Young of the International Business Times writes a story with the headline: “Wealthiest US Households Are Worth More Than They Were In 2003; Everyone Else Is Still Trying To Recover.”  The piece begins, “While investors have been enjoying solid gains since the end of the Great Recession five years ago this month, a new study shows just how much wealth most American households have yet to recover. For the poorest households, debt has increased threefold since 2003, with recessionary effects lingering.”

And here is the supporting evidence Angelo provides: 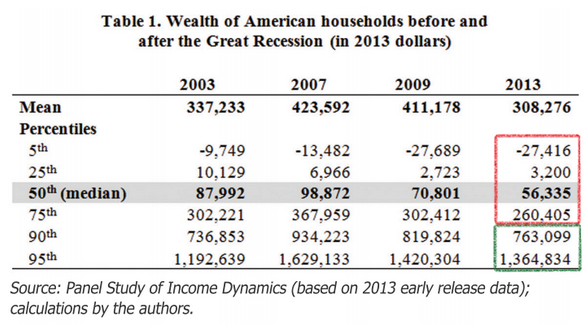 You’ll notice that those in the 90th and 95th percentiles haven’t recovered to 2003 levels since they never slipped below them in the first place.  You’ll also notice that the data doesn’t seem to support Angelo’s claim that “investors have been enjoying solid gains since the end of the Great Recession five years.”  If so, why is their household wealth still lower than it was in 2007 or 2009?

3. The take away from this Sally Kohn column on the Hobby Lobby case is that freedom of religion means that owners of companies must be forced by the government to provide their employees with birth control.  That’s not what she writes, but there is no other way to explain nonsense like this:

Moreover, as I have written previously, freedom of religion explicitly includes not only the freedom to practice one’s religion but to be free from the imposition of someone else’s religion. The owners of Hobby Lobby and Conestoga Wood cannot be allowed to impose their religious beliefs on their employees.

How does refusing to pay for birth control impose a religious belief on anyone?  It doesn’t, of course.  But never underestimate a feminist’s ability to twist words away from any sensible meaning in order to achieve her political goals.