ConservativeBlog.org
Posted at 02:28h in Blog, Health by David Hogberg

The evidence is slowly building up that the ObamaCare exchange are heading for a death spiral.  Below is more evidence of that people on the exchanges are sicker than average and, in one state, of people dropping out of the exchange.  Also, this post ends with a discussion of why the heavy enrollment in silver plans may mean something other than the exchanges are attracting sick people.

1. Survey shows people on the exchanges are in poorer health.  A recently released survey from the Kaiser Family Foundation examined the health status of people in exchange plans and non-exchange plans:

Those in fair or poor health comprise 20 percent of those in exchange plans while they are no more than 9 percent in other plans.  This strongly suggests that those with the most health problems are joining the exchange. That is the first step in a death spiral.

2. Colorado’s estimate of exchange dropouts increases. Back in April officials at the Colorado exchange predicted that about 13 percent of enrollees in their exchange would drop their insurance or never pay their premium.  They recently increased that estimate to 24 percent.  ”According to the revised estimates, Connect for Health expects 35,800 of its 152,200 individuals covered with exchange policies this fiscal year to drop coverage.” More here. 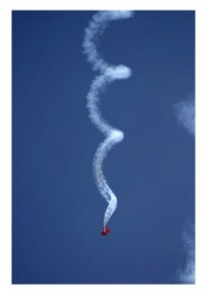 We don’t have any data on the health status of those who are leaving, but if a person really needed insurance—that is, they had considerable medical problems—what are the chances he or she would drop out?  The smart money is on most of the dropouts being people whose health is good enough that they can afford to dump their plans. Thus, those left in the Colorado exchange pool will likely be much sicker than average.

Also, remember when insurers were saying only 10 to 20 percent of enrollees were not paying their premiums? Wonder what they’d say today?  Also, if this is going on in Colorado, what’s going on in the rest of the exchanges? Maybe the Obama Administration will release another enrollment report in a month or so to let us know. Hold your breath!

3. Silver plans: death spiral alert or just good deal?  About two weeks ago the Dept. of Health and Human Services released a report on premiums and premium subsidies on the exchanges.  At the time I argued that the inordinate number of people who signed up for silver plans and the fact that the highest average subsidy was among the silver plans suggested that a lot of sick people were signing up for the exchange.  My reasoning was that people get a cost-sharing subsidy to help pay for deductibles and co-pays if they make 250 percent of federal poverty level or less and choose a silver plan.  People choosing such plans are likely anticipating high medical costs in the future.

Well, some colleagues of mine have pointed out another explanation for the enrollment in silver plans.  Look at Table 2 of the report and focus on the column “Average Premium After Tax Credit.” 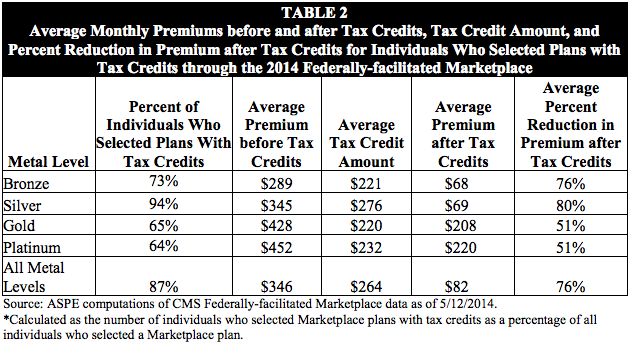 You’ll notice that the premium for silver is only $1 higher than the bronze plan.  Thus, it appears that the tax credits may have made silver plans look like a very good bargain compared to bronze plans.  And if one also qualifies for the cost-sharing subsidy, the silver plan becomes a good bargain even for someone in good health. Even a very healthy person would think that getting a cost-sharing subsidy is a good deal if he only has to pay a few dollars more than he would for a bronze plan.

So, based on the HHS report we don’t know if people are choosing the silver plan because they have a lot of health expenses or because the premiums subsidies make those plans a good deal.  Of course, it could be some of both.  But, at this point, one can’t say either way.

Let’s hope that the next KFF survey breaks down health status on the exchange by plan type. That would give us a better idea if, indeed, sicker people are signing up for silver plans.