ConservativeBlog.org
Posted at 11:12h in Articles, Blog by Amy Ridenour

Some of the things we wingnuts are “obsessed” by: the medical device tax, Dinesh D’Souza, exaggerating, Obama phones, school-for-cash (whatever that is), socialism, Kenya (in two ways), food stamps, abortions at 20 weeks, Obama’s TelePrompTer (obsessing over which, Salon says, might be “racist”), inflation, national parks, voter fraud, John Kerry’s gaffes, austerity, ACORN (Salon says it is unconstitutional to be obsessed by ACORN, so I like to call ACORN a tax), ObamaCare (this is actually true), and repealing ObamaCare, also true, not to mention pending.

We did relax on one issue. Salon said we had an “obsession” with crime last August, but on August 8 of this year it said we had given up Nixon’s “obsession” with law and order, which raises the question of whether we ever really were obsessed with it, or Salon just confused us with Nixon. Or maybe Salon just likes publishing big pictures of Nixon. Because, you know, Nixon was a Republican and he tried to use the IRS for political purposes.

I admit to a certain confusion because Salon also says we wingnuts are obsessed with “policing women’s sex lives.” Law and disorder?

Not that only wingnuts are obsessives. All of America has both a wedding dress “obsession” and a cannabalism “obsession.” (Be careful at wedding reception buffets.) We Americans also are obsessed with women’s figure skating, because we’re obsessed with watching women fall down. America also has a “celebrating moms-to-be” obsession, which started a few months after the wedding dress obsession, and a “missing white women” obsession, which makes sense to the extent that the more women you have around, the more wedding dresses, figure skaters and baby showers you will have. Americans are a very logical people. 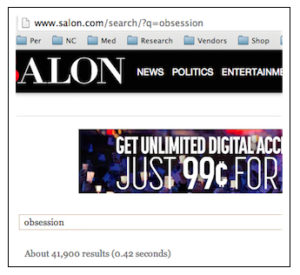 The U.S. Navy is obsessed with whales, which makes sense: It’s the best branch of the military to join if you want to see one. Big Pharma has an “attention” obsession, which was news to me but I wasn’t paying attention. Four months before the last presidential election, Salon reported Mitt Romney had an “animal terrorist” obsession, by which Salon meant the Animal Liberation Front, not presidential candidates who have eaten dog meat, though the latter is more likely to be true.

Even the Salon writers have self-confessed obsessions: with swastikas and reading Mormon housewife blogs. I’d make fun of that but I don’t know where to start.

Why don’t you hear about all this from other parts of the news media? Perhaps the media is distracted by its “parenting Suri Cruise” obsession.

On August 7 Salon ran the headline, “America was built by obsessive compulsives.” I first thought that’s a compliment to wingnuts and others prone to obsessiveness, but then I reconsidered.

I’m not sure Salon approves of America.