ConservativeBlog.org
Posted at 09:46h in Articles, Blog by David Hogberg

That was the assumpton that Emily Bazelon’s brought to her article on why she doesn’t like to call the police, especially on black people.  Consider this passage:

The divide opens early in life: Black kids are far more likely to be suspended, expelled, and funneled into the juvenile justice system than nonblack kids. Again, the disparity can’t be explained by their behavior: It reflects the heavy hand of systemic bias.

The link leads to a Washington Post article on a 2012 U.S. Dept. of Education Civil Rights Survey showing that black students were disciplined more often than other racial groups.  For example:

Yet the data from the survey does not reveal whether the different outcomes stem from student behavior or some “systemic bias.”  It doesn’t show how many times students from various racial groups misbehaved—only the number of times they received some form of discipline for it.  Bazelon assumes that students of all racial groups misbehave at equal rates and that unequal rates of discipline must reflect systemic bias—presumably the racism of the white officials who run those schools given the tone of the rest of her article.

But the Post article actually throws some cold water on that theory which Bazelon might have noticed but for her ideological blinders:

Beyond police contact, the data show persisting disparities in out-of-school suspension. African Americans were more than 3½ times as likely to be suspended or expelled as white students, the data showed.

Black males stood out, with 20 percent being suspended from school during the 2009-10 school year. By comparison, 7 percent of white males, 9 percent of Hispanic males and 3 percent of Asian American males were removed from school for disciplinary offenses. (Italics added.)

So, let’s see if you buy this theory:  The white racism that is systemic in the school system discriminates heavily against blacks, treats Hispanics only slightly worse that whites, and treats Asians the best of all.

Here’s another theory: The school system is actually run by racist Asians who, of course, treat Asians the best but for some reason have a disproportionate animus toward blacks.

And here’s a theory that’s a great deal more plausible:  Students from different racial groups have not been misbehaving equally.

Digging down into the Dept. of Education data a bit reveals some other holes in the Bazelon’s “equality of misbehaving” assumption.  Take, for example, Curie Metropolitan High School in Chicago.  Below is the enrollment and discipline data of that school broken down by race from the Dept. of Education’s website: 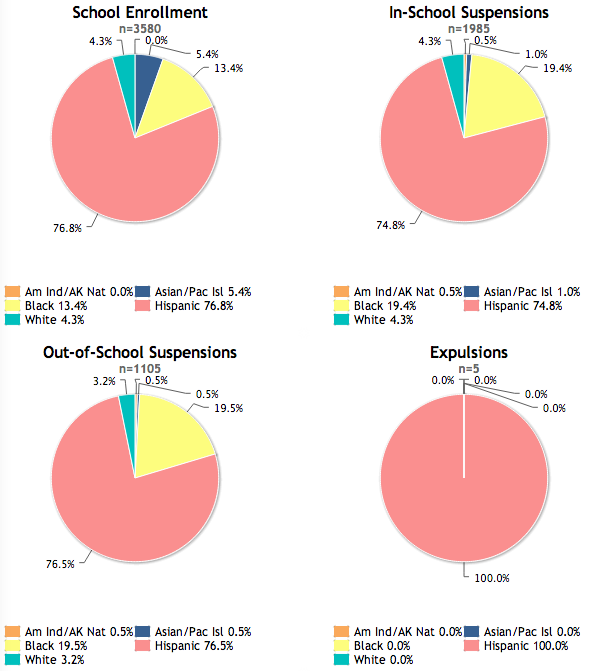 The reason I chose Curie Metropolitan High School is that systemic racism doesn’t seem to explain these results. At the time these data were taken in 2009-2010, Curie’s principal, Phillip C. Perry, was black, as was the CEO of Chicago Public Schools, Ron Huberman.

Economist Thomas Sowell has long pointed out that it is almost impossible to find different racial groups with equal outcomes.  The norm through history is one of different groups having very different outcomes.  But don’t expect the political left to acknowledge this any time soon.

CORRECTION: While Ron Huberman has a dark complexion he is not an African-American.  He is, in fact, the son of Holocaust survivors.  Sorry for the error.