ConservativeBlog.org
Posted at 05:43h in Blog, Health by David Hogberg

Score one for this side of the pond!

Last night I was on Thom Hartmann’s “The Big Picture” with Ben Cohen of the Daily Banter.  Cohen, who is from Great Britain, suggested that I didn’t know how his home country’s single-payer health care system works because I claimed that there were bankruptcies due to medical bills in the U.K.  The exchange begins at about 22:49:

The link I was referring to in that exchange is a report from Britain’s Insolvency Service entitled “Causes of Failure in Bankruptcy and Compulsory Liquidation.” Here’s Table 2 from page 10:

Additionally, a report from the World Health Organization also cites research that “within the United Kingdom, sickness or disability accounted for 5% of households in financial difficulties in 2002.”

The idea that single-payer systems don’t have medical bankruptcies is based on the fact that health care is “free” at the point of service in such systems.  After all, if people don’t have to pay for health care (at least not directly), how could they have a bankruptcy due to medical bills?

For starters, medical bills are not the only way a medical bankruptcy can occur.  For example, if you have an illness that requires a major operation in Britain, you are likely to end up on a long waiting list.  And if the illness renders you unable to work, then the longer you are on the waiting list the more your finances will be strained. 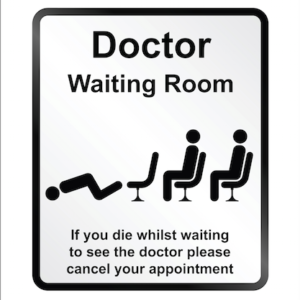 Consider Torron Eeles, a British plumber who broke his upper left arm in a fall. While he waited for an operation, his arm twisted into a … well … just take a look at the photo. As the article stated, Eeles’s arm “twisted out of shape, hangs limply by his side, meaning he cannot work for a living and now faces the prospect of losing his home.”  At one point Eeles had waited 12 months because his operation had been cancelled four times. He called the wait “disgusting” and said “I wish I’d had the money to go private.”  I can’t find any information on how long Eeles had to wait for an operation or how precarious his finances became, but it’s not hard to see how a situation like his could result in bankruptcy.

Eeles is far from alone.  Britain’s National Health Service estimates that, as of June, at least 3 million patients were waiting for treatments such as surgery, while over 15,600 operations were cancelled at the last minute in the second quarter of 2014.  Another 809,000 patients were waiting for a diagnostic test. With so many people waiting for care, and some of those people unable to work because of it, some bankruptcies are inevitable.

It’s a myth that there are no medical bankruptcies in single-payer systems.  But as Ben Cohen showed, such myths die hard.