ConservativeBlog.org
Posted at 05:35h in Articles, Blog by David Hogberg

One of the other points of contention between Ben Cohen and myself on Thom Hartmann’s show the other night was whether President George W. Bush deregulated. Cohen claimed there was a “massive binge of deregulation” under Bush. When I insisted there wasn’t, Cohen replied, “Just saying there wasn’t doesn’t make it so.”  (The discussion starts at about 35:20, below.)

No, my saying it doesn’t make it so.  But the evidence does: 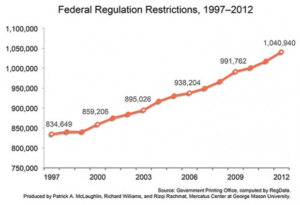 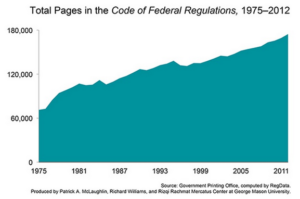 The first figure shows the accumulation over time of restrictive words in the Federal Register such as “shall,” “must,” or “required.”  The year before Bush became president, there were 856,209 such words.  In his last year of 2008 there appears to be about 960,000, an increase of over 100,000.

Further, Bush’s regulations may have been more costly than his predecessors.  A few years ago Veronique de Rugy claimed that, while the number of new rules from the Bush Administration had slowed,

the new regulations’ cost to the economy will be much higher than it was before 2001. Of the new rules, 159 are “economically significant,” meaning they will cost at least $100 million a year. That’s a 10 percent increase in the number of high-cost rules since 2006, and a 70 percent increase since 2001. And at the end of 2007, another 3,882 rules were already at different stages of implementation, 757 of them targeting small businesses.

She also noted, correctly, that “Some people still seem to think Republicans take a hands-off approach to regulation, probably because the party is always quick to criticize the burdens regulations place on businesses. But Republican rhetoric doesn’t always match Republican policy.”

Unfortunately, some people still think that.