24 Sep 2014 We Have No Liberty: Now the Government is Coming for Our Hobbies

ConservativeBlog.org
Posted at 16:33h in Articles, Blog by Amy Ridenour 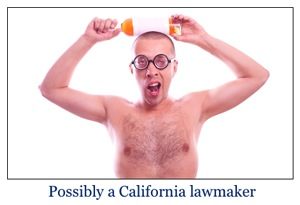 The state of California has fined a hobbyist winery $115,000 because some of the people working at the — let me use this word again — HOBBYIST winery were volunteers.

National Center Senior Fellow R.J. Smith, who knows as much about wine as he does about the benefits of liberty (and that’s saying something), has this comment:

Outrageous example of out-of-control government tyranny. Just what California needs, fewer wineries and small businesses. One of the great joys of wines has been the ability to volunteer during harvest season and also grape stomping. All over the world. Widely spreads the enjoyment and love of wine. And sometimes interests young people in a career in wines.

So the government says we can’t have volunteers and interns any longer. Who are they to say?

What was that that Mr. Jefferson wrote in 1776 — about the people facing a government that is no longer protecting life, liberty and property: “…it is their right, it is their duty, to throw off such Government, and to provide new Guards for their future security.”

The state of California, which opposes liberty, has made it illegal for business to accept the help of volunteers. Across the board.

So if you love model trains and want to hang about a California-based model train shop on Saturday afternoons, answering kids’ questions, don’t. That’s illegal.

If a California business seeks volunteers to transport food to a community event or food pantry, don’t volunteer. It’s illegal.

If a someone in your California church or synagogue is confused about how to do the tax forms for his small business, don’t help unless you charge him. You’d be breaking the law.

Heck, by the standards of this law it is illegal to drive your own daughter to her babysitting job, unless you charge her. The law doesn’t have exceptions for family members.

As R.J. (and T.J.) noted, we have a duty to throw off governments such as this.

It’s difficult to imagine who the idiotic lawmakers who voted for this thought they were helping. Do they really presume hordes of Californians are going to persuaded to work for free for multitudes of businesses, unless they think it is worth their while? And if it is worth it to them, then why should government stop them?

Sadly, even if California lawmakers wise up, the story ends unhappily for this winery, which will close this year, thanks to the state of California. And lest you think, good, these people were taking advantage of their volunteers to make money, be aware: This winery did not sell its wine in stores. It served it to visitors. This was a place where people socialized, picked grapes, made wine and had fun.

Until the government we should overthrow said they couldn’t.