08 Oct 2014 The Ripple Effect Of ObamaCare On Jobs

ConservativeBlog.org
Posted at 15:03h in Blog, Health by David Hogberg

With ObamaCare’s employer mandate less than three months from coming into effect, it’s a good time to review what impact ObamaCare is having on the job market.

1. Part-Time, Outsourcing, Lower Wages, etc. In August, the Federal Reserve Banks of Atlanta, Dallas, New York and Philadelphia all released reports on ObamaCare’s impact in their respective regions.  The Atlanta Fed surveyed businesses in its region about the “elevated levels of part-time employment.”  There were many reasons for the increase in part-time employment, with one reason being “a large amount of uncertainty around the future cost of health care and the future pace of economic growth.”

The Atlanta Fed did not survey businesses about the specific effects ObamaCare was having on employment, but the Dallas, New York and Philadelphia Feds did.  Here’s a summary table:

If you squint real hard you’ll find one indicator in there going in the right direction (barely). Otherwise, the table shows that if you mandate that employers with 50* or more full-time employees, with “full-time” defined as 30 hours a week or more, must provide insurance to their employees, then employers have an incentive to decrease the total number of workers they hire and pay them less, hire more part-time workers, outsource more work and charge higher prices.  That President Obama unlawfully suspended that mandate until after the 2014 election makes an awful lot of sense now, doesn’t it?

2. Those Who Most Need Full-Time Work Are Having A Harder Time Finding It.  At one point various liberal economists claimed ObamaCare’s employer mandate was not increasing part-time work.  Then Jed Graham of Investor’s Business Daily dug into the data and found that the reason part-time employment was not increasing is that the number of hours worked was increasing for people in relatively high-paying jobs.  But, for workers in industries where the average hourly wage was $14.50 or less, the number of hours worked had been declining: 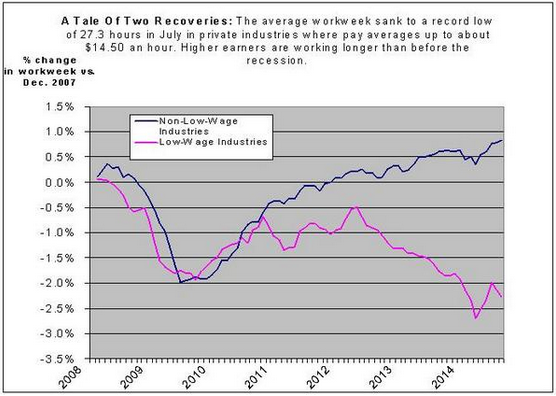 Graham states, “Overall, in these low-wage industries which employ 30 million rank-and-file workers, the average workweek shrank to 27.3 hours per week in July….For low-wage industry workers…the recovery in the workweek from a then-record low 27.5 hours in mid-2009 began to reverse in the latter half of 2012, and it’s been pretty much all downhill since then.”  Thus, for employees who are least likely to have employer-provided insurance, employers appear to be limiting the hours those work.  Given the relatively low wages, it is likely that there are many workers in this group who are in need of full-time hours.

3. What Ever Happened To ‘Job Sharing’?  I haven’t seen anything in the news lately about the new practice of “job sharing” whereby businesses share employees so that employees can work close to full-time hours—yet the businesses can list them as part-time to avoid the employer mandate. Back in February of last year, the Wall Street Journal reported, “It’s already happening across the country at fast-food restaurants, as employers try to avoid being punished by the Affordable Care Act. In some cases we’ve heard about, a local McDonalds has hired employees to operate the cash register or flip burgers for 20 hours a week and then the workers head to the nearby Burger King or Wendy’s to log another 20 hours. Other employees take the opposite shifts.” 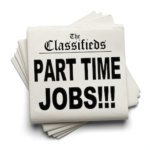 In July 2013, the Huffington Post reported on different owners of Fatburger franchises engaging in the practice and noted, “The Fatburger scheme is legal, as long as the franchises technically have different owners, according to Catherine Ruckelshous, the legal co-director at the National Employment Law Project, a low-wage worker advocacy group”

It seems likely that the practice is accelerating as the January nears.  Unfortunately, the practice is not without costs.  The owners will no doubt have more paperwork costs while employees will have the added time and travel costs of working at more than one eatery.  I doubt those costs will be that big, but they could be entirely avoided if the employer mandate were repealed.