07 Jan 2015 Sometimes Reality Even Finds Its Way into Harvard

ConservativeBlog.org
Posted at 11:31h in Blog, Health by David Hogberg

Every so often, a really wonderful article appears in the New York Times.  Robert Pear’s “Harvard Ideas on Health Care Hit Home, Hard,” is one:

“For years, Harvard’s experts on health economics and policy have advised presidents and Congress on how to provide health benefits to the nation at a reasonable cost. But those remedies will now be applied to the Harvard faculty, and the professors are in an uproar.

“Members of the Faculty of Arts and Sciences, the heart of the 378-year-old university, voted overwhelmingly in November to oppose changes that would require them and thousands of other Harvard employees to pay more for health care. The university says the increases are in part a result of the Obama administration’s Affordable Care Act, which many Harvard professors championed….

“In Harvard’s health care enrollment guide for 2015, the university said it ‘must respond to the national trend of rising health care costs, including some driven by health care reform,’ in the form of the Affordable Care Act. The guide said that Harvard faced “’dded costs’ because of provisions in the health care law that extend coverage for children up to age 26, offer free preventive services like mammograms and colonoscopies and, starting in 2018, add a tax on high-cost insurance, known as the Cadillac tax.”

This may be one of the few good things to come out of ObamaCare. 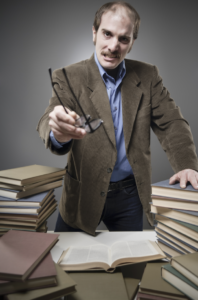 The article should not only be read, but savored.  For example, some Harvard faculty are upset that their insurance policy will now include a deductible.  For an individual, that deductible will be—wait for it—$250!  Oh, the horror, the horror!!  How will those impoverished Harvard professors ever afford it?

Then there is the ignorance:

“But Jerry R. Green, a professor of economics and a former provost who has been on the Harvard faculty for more than four decades, said the new out-of-pocket costs could lead people to defer medical care or diagnostic tests, causing more serious illnesses and costly complications in the future.

“‘It’s equivalent to taxing the sick,’ Professor Green said. ‘I don’t think there’s any government in the world that would tax the sick.’”

If requiring people to pay more for their health care is equivalent to taxing the sick, then what exactly are wait lists for surgery, diagnostic tests and cancelled surgeries?  Perhaps Professor Green should travel to Great Britain and ask some of the patients there.

ObamaCare lends credence to William F. Buckley’s statement that he’d “rather entrust the government of the United States to the first 400 people listed in the Boston telephone directory than to the faculty of Harvard University.”