Press Release
Posted at 06:53h in Articles, Health by The National Center

Washington, D.C. – “Leftists who claim that anticipated premium hikes on the ObamaCare exchanges are nothing to worry about are doing Americans a disservice,” says Dr. David Hogberg, senior fellow at the National Center for Public Policy Research.

In fact, he says, the rate hikes likely signal a “death spiral” for ObamaCare.

In a new National Policy Analysis paper entitled “ObamaCare Premium Hikes for 2016—Ignore Them at Your Own Risk,” Dr. Hogberg examines in depth the requested premium increases recently released at “Rate Review” by HealthCare.Gov. He argues that the rate hikes are likely the beginning of the death spiral for the ObamaCare exchanges. Yet leftists are dismissive of this.

“Kevin Drum of Mother Jones dismissed the rate hikes, saying that we’ve seen this all before,” said Dr. Hogberg. “Well, we have seen it before, but the data for 2016 shows that it is getting worse.”

Dr. Hogberg’s analysis shows that there are many more double-digit premium hikes requested for 2016 than there were for 2015. And, as the table below shows, those premium hikes are larger than they were in 2015: 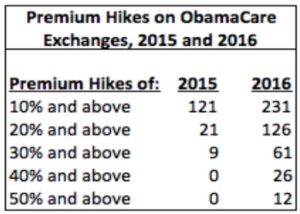 “The increases for 2016 will impact consumer behavior,” says Dr. Hogberg. “Some of the healthiest people facing these hikes will probably flee to cheaper insurers. That will leave insurers with big rate hikes in 2016 with an even older and sicker risk pool, forcing them to hike rates even more for 2017.”

“When that happens, those cheaper insurers won’t be cheap for very long,” says Dr. Hogberg. “The younger and healthier will then have no place to go to avoid higher insurance prices other than to leave the ObamaCare exchanges entirely. And when that happens, the death spiral will be in full gear.”

David Hogberg is a Senior Fellow at the National Center for Public Policy Research. His forthcoming book, Medicare’s Victims: How the U.S. Government’s Largest Health Care Program Harms Patients and Impairs Physicians, will be available July 6.

The National Center for Public Policy Research is a conservative, free-market think-tank based on Capitol Hill that was founded in 1982. Sign up for free issue alerts here.