ConservativeBlog.org
Posted at 06:38h in Blog, Health by David Hogberg

1. First the “Front End” of the ObamaCare website was a problem.  Now the “Back End” is.  The Office of Inspector General for the Department of Health and Human Services released a report stating that the Center for Medicare & Medicaid Services “did not effectively ensure the accuracy” of $2.8 billion in exchange subsidies.  That’s bureaucracy-speak for “a lot of subsidies went to people who shouldn’t have received them.”

In late 2013, when healthcare.gov was a useless, glitchy mess for

members of the public, government officials had another, less-noticed problem on their hands.

Everyone knew — many from experience and many from the news coverage — that the website the government had built to connect Americans with subsidized insurance policies did not work very well on the front end for months after its launch. The dirty secret, though, was that the back-end of the site had not even been built — the part that was supposed to make sure subsidies were set properly and insurers received payments on behalf of each customer.

Congress noticed this even then, and asked Health and Human Services Secretary Kathleen Sebelius about it in a December 2013 hearing. She reassured members that it would be up and running eventually, and added, “There’s a manual workaround for virtually everything that isn’t fully automated yet.”

Only now it is becoming clear how inadequate the agency’s preparations had been.

Yeah, about $2.8 billion worth of inadequacy.

2. Of the people who faced higher insurance costs due to ObamaCare, only 1 in 5 received a subsidy. Ed Haislmaier at the Heritage Foundation notes that while the “stated purpose [of the exchange subsidies] was to help more low-income individuals purchase health insurance, the subsidies also served to mask the significant health insurance premium increases that would inevitably result from the law’s new insurance benefit requirements and regulations.  For instance, if a 45-year-old received $540 annually in subsidies, he may not realize that the premium for the lowest-cost health insurance plan in his area actually had increased by $600 a year thanks to Obamacare regulations—because the government was paying most of that additional cost.”

The problem is that “the design of the subsidies also created one of the Affordable Care Act’s biggest inequities. Namely, the number of people getting the new subsidies is only a small subset of the much larger number of people whose coverage is subject to the law’s new requirements that drove up health insurance premiums.”  ObamaCare “regulation increased health insurance costs for 20.9 million covered by individual or small-employer group policies in the 34 states affected by King v. Burwell. Of those, 18 percent received an offsetting subsidy and 82 percent did not.”

3. 41 percent of people on the exchanges who were previously insured would like their old insurance back.  The Foundation for Government Accountability (FGA) has released an extensive survey of people who have insurance on the ObamaCare exchanges.  Turns out, all is not as rosy as ObamaCare supporters claim.  (I know, what a shocker.)  For example, most people did not purchase a plan on the exchange because it was cheaper: 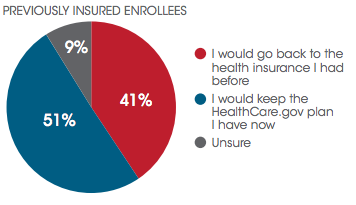 The survey also asked, “ObamaCare outlawed many health insurance plans that were available before 2014. If Congress re-opens the law, should they allow people to buy the types of plans that used to be sold before 2014?”

The FGA survey has loads of good stuff. When you get time, take a look.