ConservativeBlog.org
Posted at 04:36h in Blog, Health by David Hogberg

Today is the 50th Anniversary of President Lyndon Johnson signing Medicare into law.  The Daily Caller published my article today explaining why that is nothing to celebrate.  Here is an excerpt:

Medicare has a dark underbelly that is seldom given much attention in the media. Certain patients, often the sickest, are harmed by Medicare’s policies. Grandiose promises were made when Medicare was signed into law. Yet, as the example of patients like Dolores makes clear, the program has failed to live up to its promises. 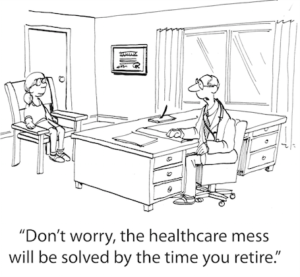 When President Johnson signed Medicare, he said, “No longer will older Americans be denied the healing miracle of modern medicine.”  Yet Medicare denies treatment routinely, even when a physician recommends that treatment.

That is another thing Medicare was not supposed to do.  The first part of the legislation, entitled “Prohibition Against Any Federal Interference,” makes a fairly explicit promise that Medicare would not interfere with the doctor-patient relationship. It states, “Nothing in this title shall be construed to authorize any federal office or employee to exercise any supervision or control over the practice of medicine.”

Physicians are ready sources of complaint about how Medicare interferes with their practice.

The article focuses on Dolores Reiss and Clay Bell, two Medicare patients who were denied much needed speech and physical therapy due to Medicare’s rules.  The article traces their struggles.  But you can read their full stories in my book, Medicare’s Victims: How the U.S. Government’s Largest Health Care Program Harms Patients and Impairs Physicians.