18 Feb 2016 Liberals, It’s a Lie to Say Criticism of Obama Is Because He’s Black 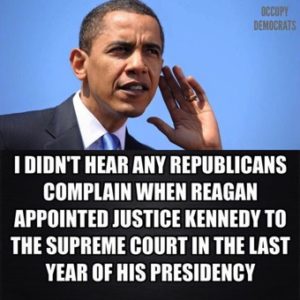 To hear MSNBC tell it, Obama is prohibited from doing many things because of his black ancestry.

Case in point is an on-air discussion between MSNBC employees Joy Reid and Chris Matthews, in which Reid alleges that Barack Obama “uniquely” among Presidents (code for “he’s black”) is “not allowed” to issue executive orders or to make nominations to federal courts.

Matthews does not challenge Reid, who is either colossally ignorant or a flat-out liar. (If she writes to me with an explanation or a correction, or makes one elsewhere and I learn of it, I’ll print it at the end of this post.)

Reid, in part (you can see the video here), says:

…only Barack Obama, unique of all the presidents, is not allowed, because we’ve invented this supposed precedent that in the eighth year, they don’t get to nominate, well, you know what, Ronald Reagan did, Lyndon Johnson did, and he announced he wasn’t going to run for reelection.

If a doctor doesn’t know how to take out someone’s tonsils, and he does so anyway, and causes injury, would we say, Oh! He didn’t know any better! Don’t blame the doctor!

No, and by the same standard, we should expect journalists (who at the MSNBC level get paid more than most doctors) to know what they are doing before they report. Joy Reid is either lying or committing malpractice, and Chris Matthews is the nurse who sees the surgeon opening the stomach looking for tonsils — and says nothing.

Here is the truth:

Fact one: Ronald Reagan did not make any nominations in a presidential election year. He just didn’t. Could Reid not look it up?

Fact two: Lyndon Johnson did make a nomination in a presidential election year, so Reid is correct on that point, but she leaves off a pertinent fact: After Johnson did so, the Senate filibustered his nominee, who withdrew from consideration. The nominee was never confirmed, and the seat was filled by the next President, who was of the opposite party. No one at the time claimed Johnson’s ancestry had anything to do with these events.

Obama can nominate someone, so on point one, Reid is complaining although Obama can do something Reagan didn’t do (because racism). As Walter Mondale once said, where’s the beef? (Though Mondale, a Minnesotan, is white even by white standards, so possibly “white privilege” is at play.)

On point two, Reid is ignoring that Supreme Court nominees of white Presidents sometimes get shot down, so if it happens to Obama (so far, it has not), it cannot accurately be said to be something “unique” (her word) to black Presidents.

Reid’s point seems to come down to: Poor Obama. He’s being treated like other Presidents. 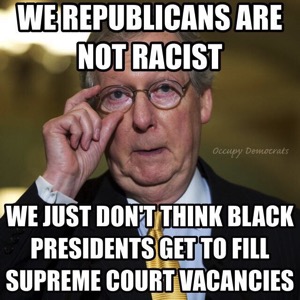 Except he isn’t. Obama stands out as a particularly egregious serial violator of the Constitution, and he’s mostly getting away with it. He’s not the only President to have violated the Constitution, of course, but he does it especially often (Google liberal law professor and Obama voter Jonathan Turley if you have no idea what I’m talking about, or go here, here or here), to the point that more than a few people, not all of them conservatives, believe he is putting our system of checks and balances at risk.

White Presidents shouldn’t issue unconstitutional executive orders, either. Look up “Bush unconstitutional actions” on Google sometime. If the Google results then look like they do today, you’ll see the first few results are criticisms of Bush on this point by conservative and libertarian groups. Are you claiming, Reid, that conservatives only defended the Constitution during the Bush 43 Administration because Obama’s black?

Or maybe Obama being black just does not have anything to do with any of this…?

As for federal court nominations, Reid. You claim Obama is “not allowed” to make any. He’s made 323 so far, just counting those confirmed by the Senate, including a two-for-two record of appointments to the U.S. Supreme Court.

Reid, if you have any evidence Obama is being treated differently because one of his biological parents was black, you sure have managed not to share any.