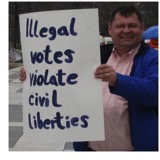 Are all these prosecutors right-wing racists?

Latest case in the news comes from Florida, where, the Orlando Sentinel reports (hat tip: Election Law Center), the mayor of Eatonville and two others have been indicted on 25 counts of voter fraud.

The Sentinel reports the mayor was accused of voter fraud in 1991 as well.

I have no idea of the mayor of Eatonville is guilty of these charges, but I do know this much: Voter fraud exists.

The only question is, why are some people working so hard to convince the public it doesn’t?