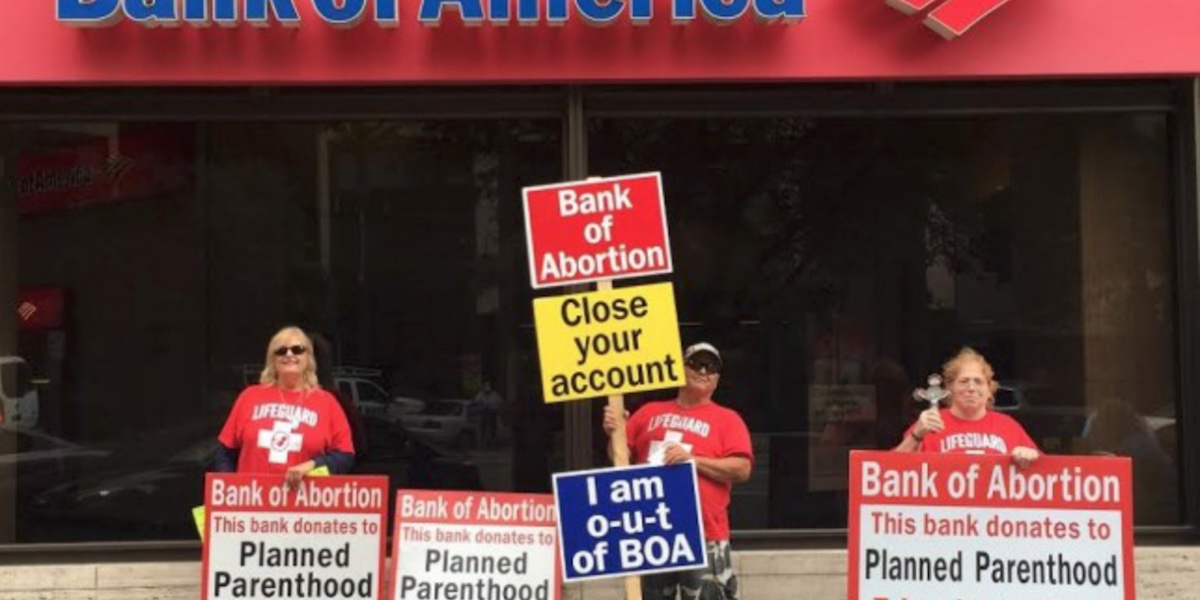 Press Release
Posted at 14:03h in Free Enterprise Project by The National Center

For years, Bank of America has said that it only donates to Planned Parenthood through its employee matching grant program. However, at today’s annual meeting of Bank of America investors in Charlotte, North Carolina, FEP Director Justin Danhof, Esq., showed company executives documentation of the bank’s repeated sponsorship of Planned Parenthood’s annual New York City gala.

2ndVote’s research and reporting on Bank of America’s relationship with Planned Parenthood is available here.

Bank of America is one of 38 companies that contributes funds to Planned Parenthood. Gallup polling indicates that, when it comes to abortion, Americans are equally divided on the subject.

And let’s not forget the racial elements at play. Planned Parenthood was founded by noted racist Margaret Sanger who wrote, “[w]e do not want word to go out that we want to exterminate the [N-word] population.” I’m not going to repeat the word that she said. How’s her organization doing in carrying out that mission? According to one study, Planned Parenthood targets minority communities by placing 79 percent of its abortion clinics within walking distance of densely populated minority communities. This leads to the inevitable result that “[e]ven though black Americans make up 13 percent of the U.S. population, 35 percent of the babies killed in abortions are black.

In the face of these earnest questions, bank CEO Brian Moynihan said nothing. He instead deferred to Andrew Plepler, the company’s Global Head of Environmental, Social & Governance.

“Plepler gave me a canned answer that repeated the half-truth about donating to Planned Parenthood via the company’s matching gift program. When I tried to interject that this wasn’t true – and indicated that I had evidence of Bank of America’s direct funding for Planned Parenthood, company officials cut me off,” said Danhof. “When I interjected that Plepler was lying, Moynihan angrily bellowed that he was telling the truth. Clearly, it’s Moynihan who has an issue with the truth.”

Audio from this initial back-and-forth is available here.

Towards the end of the question and answer period, Danhof again got up to try to ask a follow-up question. He noted the evidence from 2ndVote that showed Bank of America’s direct funding for Planned Parenthood galas in 2017 and 2018. Moynihan again shot back at Danhof and said that he could talk with Plepler after the meeting because no one else wanted to hear about abortion issues and Planned Parenthood.

“It seems very odd that through my numerous engagements today, Moynihan didn’t once defend his company’s funding of the abortion industrial complex. If he was proud of such donations, surely he would have said so,” added Danhof.

“When I spoke with Mr. Plepler following the meeting, I showed him the evidence from 2ndVote, and he said he would try and verify what funding the bank has actually provided to Planned Parenthood in recent years. I take him at his word that the bank will work to correct the record and publicly admit that it doesn’t simply donate to Planned Parenthood through employee matching, but that Bank of America does indeed directly fund the largest abortion provider in the United States.”

Today’s Bank of America meeting marks the seventh time FEP has participated in a shareholder meeting in 2019.