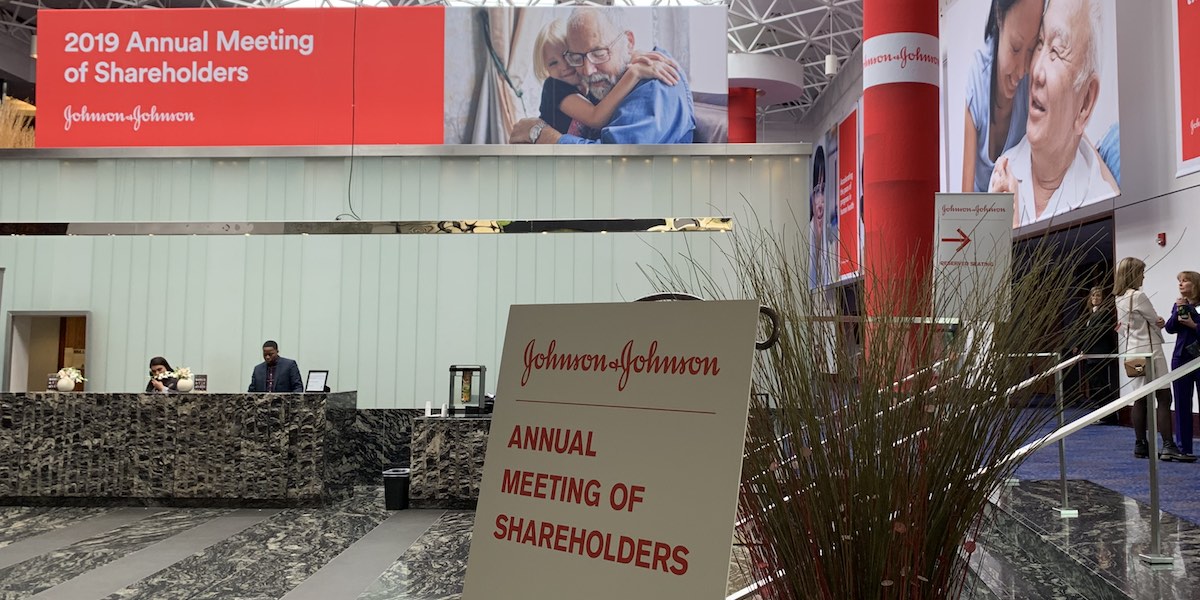 New Brunswick, NJ / Washington, D.C. – Asked to justify Johnson & Johnson’s funding of a group that promotes the rationing of health care, CEO Alex Gorsky told a representative of the National Center for Public Policy Research’s Free Enterprise Project (FEP) today that he might reconsider the company’s affiliation with the Institute for Clinical and Economic Review (ICER) if it is found to not meet the company’s goal of offering the best care to Americans in need. “Doctors, nurses, pharmacists and other health care professionals have oaths that uniformly demand they provide high-quality care to patients. Likewise, Johnson & Johnson has a credo pledging to aid those professionals and their patients. Rationing health care services violates all of these promises,” said National Center Vice President David W. Almasi, who represented FEP at the meeting. “Offering support to groups like ICER could lead to British-style rationed health care here, and that is not what an American company like Johnson & Johnson should be doing. We hope we helped educate Johnson & Johnson executives about ICER and made shareholders more aware of what is being done with their money.”

At the shareholder meeting, Almasi pointed out that ICER – whose annual policy summit and webinars are funded in part by Johnson & Johnson – was founded by Dr. Steven Pearson. Dr. Pearson previously worked with the National Institute for Health and Care Excellence (NICE) in Great Britain.

Thanks to NICE guidelines, millions of British citizens are on waiting lists at any given time for procedures, hundreds of thousands are waiting for basic diagnostic tests, and thousands of operations are regularly cancelled. The Guardian recently reported that patients in Britain “who are losing their sight are being forced to wait for months before having eye cataracts removed because” of “imposed restrictions on patients’ access to cataract surgery in more than half of England.” That’s not very nice. That sounds a lot like the left’s Medicare-for-All plan.

And that’s exactly what Dr. Pearson and ICER are hoping to replicate here in the United States. One way ICER is working to ration care is by teaming up with retail pharmacies such as CVS and instituting subjective “cost-effectiveness” thresholds.

Almasi then asked Gorsky: “Can you explain how funding ICER benefits Johnson & Johnson, and whether this funding fits within the company’s credo?”

Almasi’s entire prepared statement and question can be found here.

Johnson & Johnson’s credo, written by founding chairman Robert Wood Johnson over 75 years ago, states the company’s “first responsibility is to the patients, doctors and nurses” and to parents. It also charges the company to be “responsible to the communities in which we live and work… [and] help people be healthier by supporting better access and care.” At today’s shareholder meeting, Gorsky committed the company to “reaching more patients in areas of unmet needs” and addressing medical conditions that are treatable, curable and preventable.

Gorsky told Almasi that the company was affiliated with many associations and nonprofits. He claimed to not be fully aware of ICER’s agenda, but said he would consider re-evaluating Johnson & Johnson’s relationship with ICER or any group that did not operate in a manner consistent with the company’s credo and goals.

After the meeting, Almasi also met with a key member of the Johnson & Johnson staff to open up further discussion concerning ICER and the potential of health care rationing in the United States.

“We gave Johnson & Johnson the opportunity to walk back a relationship that should be of great worry to all health care consumers,” said Almasi. “No one should be concerned they may be deemed unworthy of lifesaving care. We hope Johnson & Johnson will take a good, hard look at ICER and become a strong opponent of any proposals that might ration health care in the United States.”

FEP has written about ICER in the past, such as this article in The Federalist, “CVS Makes Plans To Ration Customers’ Health Care.”

Today’s Johnson & Johnson meeting marks the ninth time FEP has participated in a shareholder meeting in 2019.