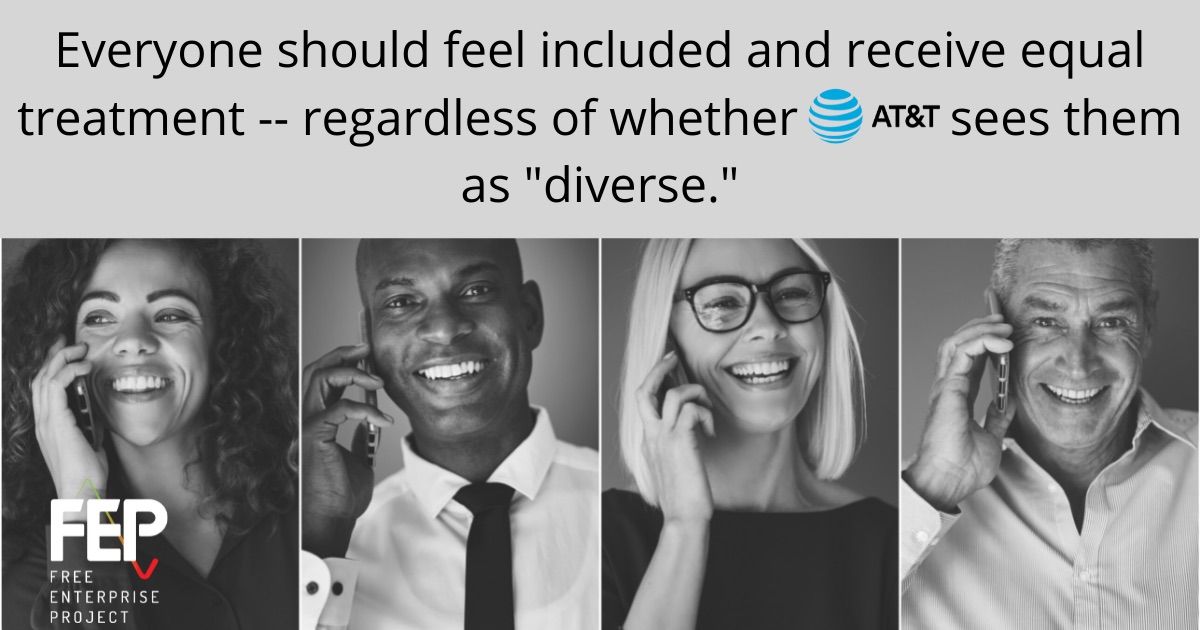 Washington, D.C. – The Free Enterprise Project (FEP) presented a proposal at AT&T’s annual shareholder meeting today challenging the company’s workplace policies that focus on characteristics such as race, sex and sexual orientation instead of merit. During the virtual meeting, FEP Program Coordinator Sarah Rehberg presented Item 7, which requested that the Board of Directors commission a racial equity audit analyzing the company’s impacts on civil rights and nondiscrimination, and the impacts of those issues on the company’s business.

“Through its emphasis on surface-level characteristics over merit, AT&T’s so-called ‘diversity, equality, and inclusion’ efforts demonstrate the opposite of antidiscrimination measures,” said Rehberg after the meeting. “Like so many other woke corporations, AT&T should stop playing politics and instead focus on its business as a telecommunications company.”

In delivering FEP’s statement in support of its proposal, Rehberg called AT&T out for opposing the nondiscrimination audit:

By opposing our proposal and arguing against an independent audit and report that seeks to include a variety of viewpoints and perspectives, the company demonstrates its disapproval of those who may disagree with its approach to “equality” and thereby underscores the very need for our proposal in the first place.

Rehberg’s remarks, as prepared for delivery, can be read here. The audio of her presentation can be heard here. Item 7, and AT&T’s response to it, can be found on pages 18-19 of the Company’s proxy statement. The proposal was not approved.

“AT&T has made a number of dreadful business decisions in recent years,” said FEP Director Scott Shepard after the meeting. “Its foray into content was a costly disaster. Its board is helmed and manned in material part by hard partisans, all of the same stripe. AT&T should be embracing our effort to make those of diverse and contrasting viewpoints secure and welcome at AT&T. That it opposes the only kind of diversity guaranteed to improve company performance reveals a great deal about what’s so wrong with the modern AT&T.”

Investors wishing to oppose race-based discrimination and other “woke” policies infiltrating Corporate America should download FEP’s 2022 editions of the Investor Value Voter Guide and the Balancing the Boardroom guide. Other action items for investors and non-investors alike can be found on FEP’s website.

Today’s meetings mark the 37th and 38th times FEP has attended or attempted to attend a shareholder meeting so far in 2022. To schedule an interview with a member of the Free Enterprise Project on this or other issues, contact Judy Kent at (703) 477-7476.