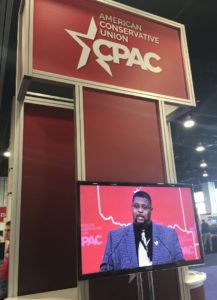 Congratulations to Project 21 member Wayne Dupree, who was named “Blogger of the Year” at the 2015 Conservative Political Action Conference (CPAC) this past weekend at the Gaylord National Resort in suburban Washington, D.C.

In addition to his work with the National Center’s black leadership network, Wayne created the NewsNinja website his own Internet radio network — We Are America Radio (WAAR) — to give additional voice to black conservatives “ready to step up in defense of their country and its future.”

Over the past year, Wayne’s work with Project 21 has included the prominent black public affairs web site EURWeb, the One America News Network and radio stations nationwide.

In the past, the CPAC Blogger of the Year Award was won by now-familiar media personalities such as Katie Pavlich and Mary Katharine Ham.  Other award recipients at the 2015 CPAC included the “Journalist of the Year” that was awarded to Jim Geraghty of National Review, the “Andrew Breitbart Defender of the First Amendment Award” to Phil Robertson of “Duck Dynasty and the “American Hero Award” that was posthumously given to former U.S. Navy SEAL sniper Chris Kyle.

Wayne said of his honor:

I am very surprised, shocked, humbled and honored to receive this award.

When you get into this grassroots fight to help save the country from an agenda that has been set forth to destroy the very fabric it was built on, you never think of awards and presentations.  This year, I went to CPAC with the idea of interviewing as many frontline newsmakers as possible to see where they were on issues that plague our communities and neighborhoods.

I’ve been doing this for less than three years now.  To have come this far this fast with so many grassroots supporters is truly amazing.  I am happy to be recognized, but I will be happier if we are able to change the course of this country — with conservative values leading the way.