According to veteran liberal Congressman James Clyburn (D-SC), commonsense conservatives are to blame for the shooting in South Carolina.

I’m not exaggerating: Clyburn claims the climate for the shooting was created by people who believe in self-defense, voter ID — even redistricting! 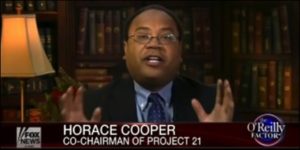 He calls these people “a cancer eating at the innards of our society,” and ties our views directly to the shooting by saying “that’s why you have these rogue police officers feeling they have license to do what they want to do and there will be no consequences paid for it.”

Our Project 21 black leadership group isn’t sitting still for this. Tune in to Fox’s O’Reilly Factor tonight, April 9, to see Project 21’s Co-Chairman Horace Cooper defend you and me and conservatives everywhere.

And sign up for free our e-mail newsletter to follow our work to defend YOUR RIGHT to hold commonsense conservative views without being falsely accused of murder.