Last Friday, Harris County Deputy Darren Goforth was essentially executed as he fueled his patrol car in a Houston suburb.  The alleged shooter, who walked up and shot the unsuspecting deputy while he was standing and then fired several more rounds after he fell, is now in custody and will face capital murder charges.

Details are still sparse and there has been no declared motive, but a major focus is that the deputy was white and the shooter is black.

It comes as radical activists are loudly condemning police in general for alleged harsh disparate treatment of blacks.  Officers have become targets of violence apparently incited by this anger in jurisdictions other than this Texas county.  Despite the danger to law and order and civil society, this radical rhetoric seems to be condoned by liberal political leadership that may go as high as the Oval Office. 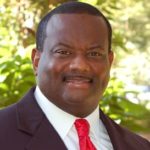 member Carl Pittman is a criminal investigator for the Harris County Sheriff’s Office, where he has served since 2001.  Pittman knew Deputy Goforth, and he has made this statement about the shooting and its ramifications he believes are related to it:

The loss of any innocent life is tragic, regardless of race.

Unfortunately, there are those in our country – within our government and outside of it – who have fueled a war against law enforcement officers.  They have made officers out to be uncaring, calculating killers of minorities – especially blacks.  They want to name streets after and march in the name of people who have done nothing but act badly.

Darren put on his uniform a few evenings ago and left his family with an expectation and a right to return to them.  But he didn’t leave without knowing the risk.  In fact, he was the very definition of bravery.

Knowing the risk, he went anyway.  But a coward – a menace to humanity with a blatant disregard for law and order – decided to steal the future that belonged to Darren with his wife and children.

This rhetoric of “black lives matter” is very incomplete – and, yes, very racist.  I am greatly offended!

My God, what have we become?  You see, all lives matter – regardless of the color.

Where is the outrage from the Obama White House?  Where is the condemnation from the race-baiting Reverend Sharpton?  You two have this blood on your hands.  You have divided this nation because it suited your sick agendas.

As I see it, there are truly only two races of people – good and bad.  Does this black murderer killing this white deputy somehow make you feel better?

I am from the old school.  God forgives, but his warriors arrange his appointments.  This is a call to arms to all law enforcement officers to keep protecting and serving the good people of all colors in our communities.  You took an oath to do so, and to hunt those down and bring to justice those who wish to destroy us.

To the evil ones who wish to start a war against the righteous – don’t start something that you are ill-prepared to finish.

Rest in peace, Deputy Darren Goforth.  We’ve got it from here!