02 Sep 2015 A Rare Moment of Agreement on Immigration 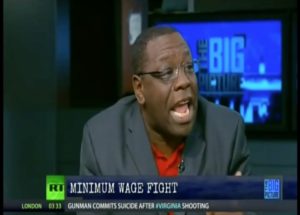 On August 26, Project 21’s Kevin Martin appeared on the talk show of liberal host Thom Hartmann, who was having his usual fun mocking conservatives.  However, on the issue of immigration, we heard a rare response from Hartmann: “I agree with you.”

Specifically, Hartmann and Martin were agreeing that comprehensive immigration reform should include the prosecution of employers who hire illegal immigrants.  They also agreed that people of color are disproportionately hurt by unchecked immigration.

Earlier in the program, Hartmann and Martin and the other panelists discussed whether more gun restrictions would have saved the lives of Virginia journalists Alison Parker and Adam Ward.  Martin was outraged by the idea that he should have to undergo counseling before being allowed to own a gun, when the burglar breaking into his house didn’t have to jump through the same hoop.

Also discussed on the RT Network’s “The Big Picture with Thom Hartmann”: the Fight for 15 movement that calls for a $15/hour minimum wage, Social Security privatization and whether Alabama’s closing of DMVs affects the procurement of voter IDs.